Communicating with Frankie: A Nova Solution 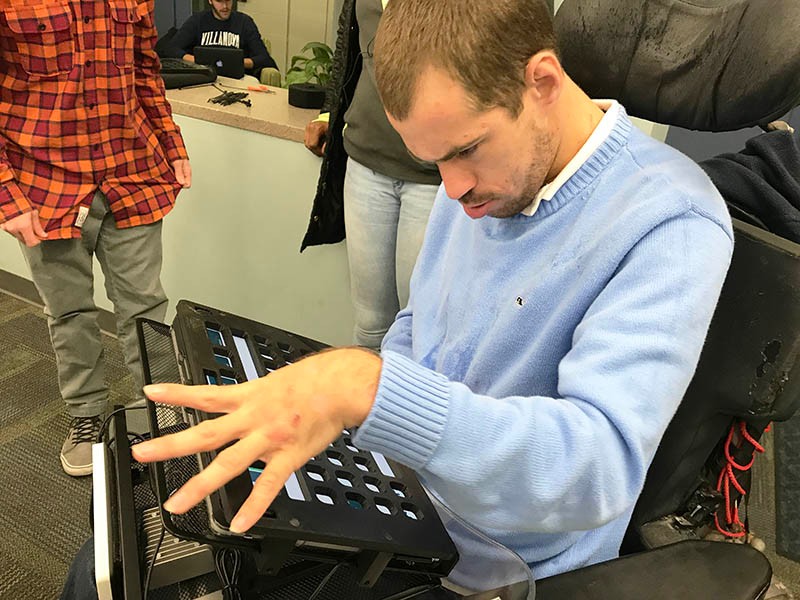 Frankie Kineavy ’14 CLAS with the original language board developed by Villanova Engineering students in 2014.

Villanova University alumnus Frankie Kineavy ’14 CLAS is intelligent, personable and optimistic. He shares his gifts as a sportswriter, local softball coach and motivational presenter (view his TEDx Talk). Along with more than 120,000 other Americans, Frankie also has spastic quadriplegia cerebral palsy, which leaves him unable to walk or speak and limits the use of his arms and hands. Eager to interact with others, he relies on Augmentative and Alternative Communication (AAC) devices, most often using a language board mounted on his wheelchair. When talking with someone, Frankie points with his thumb to a chart that contains some commonly used words and alphanumeric characters. The person with whom he is communicating reads aloud the words or letters to which he is pointing. When he wants to send a text message or email, he needs to communicate his message to whomever is assisting him so they can type it. When he needs to access the internet, an aid must type and scroll for him. When he uses a word processor, he has to convey his words to someone else so they can type for him. It’s a notably low-tech system that requires active participation from his aid or other party.

In 2016, an Electrical and Computer Engineering capstone project was introduced to implement new technology that would allow Frankie to communicate more efficiently and with greater independence. While a number of improvements were made to the system, four years later, a new team of students is undertaking a complete redesign, which has the potential to revolutionize communication for the 750,000 people affected by some form of cerebral palsy in the United States.

Adviser and Multidisciplinary Design Lab Director George Simmons ’87 MSCS explains what this redesign entails, “The plan is to develop a system based in the Apple iPad OS environment to give Frankie the ability to speak, text, email, and do anything someone without the condition would be able to do with a smartphone.” Replicating the joystick he successfully uses to control his wheelchair, the aim is to develop a product with a joystick to act as the mouse control for the computer. The capstone team comprised of Computer Engineering seniors Christian Berger and Michael DiGiacomo will experiment with the option of a large external keyboard and touch screen capabilities. Additional goals include designing a more elegant and universal mounting system, providing an easy backup scheme, and documenting the system to allow others to upgrade it in the future. The team has recruited two current Villanova students (Liam and Devon) to help with system testing since both students have spastic cerebral palsy very similar to Frankie.

Before the COVID-19 crisis, the team planned to develop their work in person with Frankie, allowing them to create only two systems, one for development and one for testing. As a result of remote learning and social distancing protocols, however, the team members are in different locations and unable to responsibly meet in person. Therefore, they now require five systems; two for the team members to use for development and three for Frankie, Liam and Devon to perform testing. This has pushed the required budget to $15,000 which far exceeds the normal capstone allowance of $500.

Villanova University has launched a crowdfunding campaign to ask the community to contribute $10,000 for the purchase of five iPads and the associated accessories and software licenses required to outfit the developers and student testers. At the project’s conclusion, the users (Frankie, Liam and Devon) will keep their systems and the College of Engineering will keep the two development systems to be used for future improvements and backup. With the Villanova community’s support, this system has the potential to change the way these participants communicate and provide newfound independence and self expression. Ultimately, this research could lead to a broader solution to help transform communication for those with spastic cerebral palsy.

Commit your support to this project today!