For the past decade, Villanova’s College of Engineering has made great strides in developing “whole-brain engineers” who engage both the logical, analytical, mathematical and scientific parts of their brains and the intuitive, creative, problem-solving side. Villanova’s commitment to entrepreneurially minded thinking throughout the curriculum is built on the premise that the best engineers bring all of these skills to the table. But, while every engineering undergraduate is exposed to these principles, some take creativity to another level, literally shining a spotlight on it.

Several of Villanova University’s engineering students have found an outlet for creative expression on and behind the stage. They are in good company—the College’s Interim Dean Randy Weinstein, PhD, is himself an actor, who originally tried theatre as an extracurricular activity to help him get into college. “I needed something that wasn’t purely academic, and I decided to pursue theatre because it was outside my comfort zone. I really enjoyed it and have stuck with it ever since.” 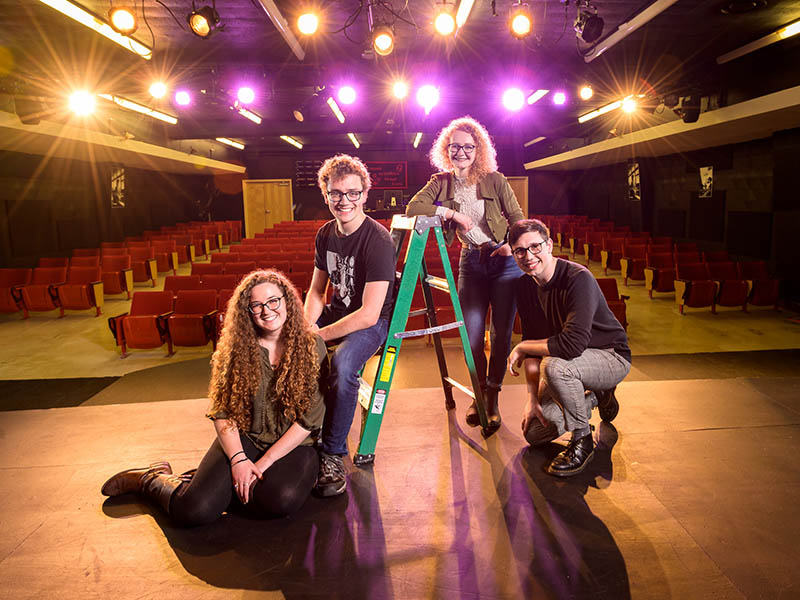 While his new role as interim dean doesn’t allow Dr. Weinstein much time for the stage, these students are finding that the theatre offers them a welcome respite from the rigors of an engineering major. Aileen Bancroft ’19 ME, John “Jack” Evans ’19 ME, Brian Jacko ’20 ChE, Kelly Jusczak ’19 ME, Kevin Key ’21 CpE and Luigi Siligato ’20 ME answered questions about their experiences:

What drew you to the stage/theatre?

Brian: Theatre was suggested to me a few years ago as something to fill time outside of school. After doing my first show, I just had to keep going with it!

Kelly: My parents always had an appreciation for the arts and would take my sisters and me to musicals and plays when we were younger.

Luigi: When my friends performed in shows in high school, I saw how much fun they were having and wanted to be a part of it myself!

Kevin: My love of entertaining others and performing for them is what initially drew me to the stage.

Aileen: I have always loved the theatre for the stories it tells. At Villanova, I found that I could help tell those stories from backstage as a wardrobe manager.

When did you first get involved?

Jack: I’ve been in musicals every year since I was 5 years old. When I decided to pursue an engineering degree, I thought that I would have to say goodbye to the stage, but I was overjoyed to find a vibrant, active undergrad theater club on campus that is open to students from all majors.

Brian: I first got involved towards the end of high school, performing in the ensemble of a few shows. It wasn’t until freshman year at Villanova, though, that I began performing regularly and getting more involved back stage as well.

Kelly: I’ve been doing theatre since I was about 8 years old, so I was glad to have the chance to continue when I got to Villanova. I have performed in seven shows with Villanova Student Musical Theatre since my freshman year and was in countless shows before that.

Luigi: I’ve now been doing theatre for four years, since my sophomore year of high school, and I have performed in three plays and six musicals.

Kevin: I first got involved in elementary school while performing in Willy Wonka Jr. with the Columbia Center for the Theatrical Arts summer camp in Columbia, Maryland.

Aileen: I was looking for a work-study job that would allow me to embrace my creative side. As a freshman I worked in the costume shop helping to sew and repair costumes; I soon became a wardrobe manager and focused more on tracking costumes, planning quick changes, helping with hair and makeup, and overseeing the dressing rooms.

What connection do you see between theatre and engineering? Is there anything about it that can help you in your future career?

Jack: Being on stage has helped develop my public speaking and improvisation skills, but I have found the bridge between my love of theater and engineering with set design and construction. Working on the sets has required a great amount of planning, budgeting, operational risk management and of course, creativity.

Brian: In set design, I often use what I’ve learned about force balance and torque to ensure that what we build lasts for the performance. Additionally, I have found that being on stage has greatly increased my presentation and interview skills.

Kelly: I think performing teaches you many different things that can be applied to any profession. It takes a lot of hard work to put a show together and teaches you physical and mental discipline, problem-solving skills, and excellent public speaking skills.

Luigi: Theatre, by its very nature, is a team effort. This is not unlike a team-oriented, engineering work environment.

Kevin: Performing has made me more comfortable presenting to audiences, both large and small, and this will be helpful in my career when I present my work to others.

Aileen: When working backstage as a wardrobe manager, it is vital to have quick problem-solving skills. Learning to think as an engineer has helped me in systemically planning costume changes and developing last minute solutions. Engineering and the arts are often viewed as competitors, but many problems cannot be solved merely by technical knowledge.

What is your favorite theatre role/experience at Villanova or elsewhere?

Jack: After two and a half years, people still recognize me from my role as Mr. Mayor in Seussical my freshman year. I think that’s the closest I’ll get to being famous!

Brian: I performed in my eighth show as Pippin in Pippin and I’ve had many great theatre experiences at Villanova. My favorite role, though, is being president of VSMT. It allows me to share my love of theatre with others and make the arts present on campus in a real, accessible way.

Kelly: Every show has been so much fun to be a part of! I’ve played many different roles, from a dancer in a sleezy night club in Nazi Germany in Cabaret to a Dr. Seuss character in Seussical, and everything in between.

Luigi: Some of my fondest memories of theatre at Villanova come from my first show— First Date. It got me into VSMT, an organization in which I have found some of my closest friends.

Kevin: In 2016, I performed in Stephen Schwartz’s Children of Eden with the Young Artists of America. The directors invited Schwartz to the final rehearsals and performance, and it was incredible to be able to work with him and hear about how and why he wrote the show.

Aileen: My favorite experience with Villanova’s graduate theatre was our spring 2019 production of Youth, during which I started training three new wardrobe managers and we grew as a team.