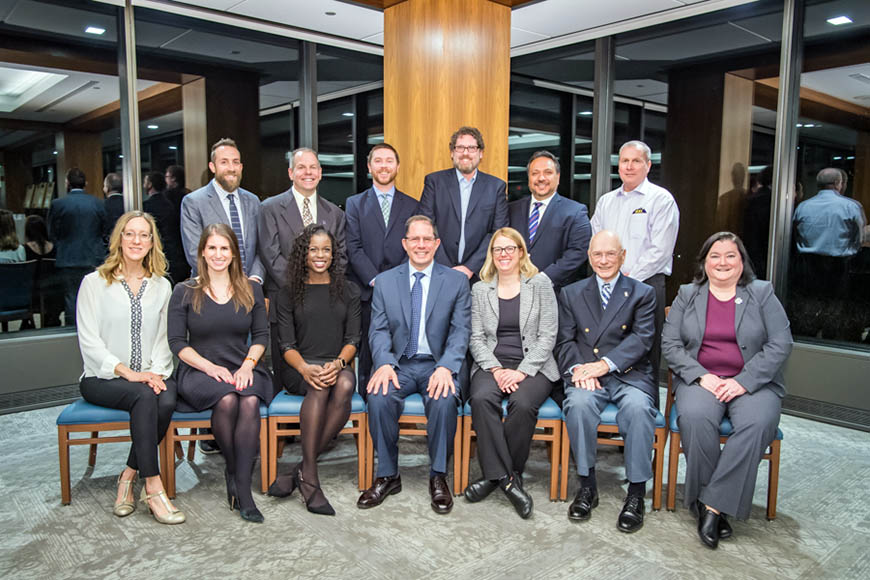 Five of the alumni awards are named in honor of the College of Engineering’s past deans:

The Gary A. Gabriele Memorial Award: Last May, Dr. Gary A. Gabriele passed away after serving as the Drosdick Endowed Dean of the College of Engineering from 2006 to 2018. Having been a strong supporter of providing more inclusive access to engineering education, the Gary A. Gabriele Memorial Award was instituted this year to recognize an alumnus who has promoted equity in the field. The inaugural recipient is Dr. Amy Fleischer ’91 ME, ’96 MSME, Dean of Engineering at the California Polytechnic State University. A tireless advocate for women’s leadership and equality in engineering, Dean Fleischer was the chair of the steering committee that launched the McNulty Institute for Women’s Leadership at Villanova, founded Villanova’s “Engineering is for Girls! Day” and led or participated in numerous women in STEM committees and outreach programs.

The John J. Gallen Memorial Award: In honor of Dean John J. Gallen (1961-1975), this award recognizes the technical achievements of an alumnus who graduated from the College less than 15 years ago. The 2019 recipient is Sherrie-Ann Martin ’09 ChE, ’15 MSChE, a senior specialist engineer in Merck & Co.’s Vaccine Product Development division. Her role supports the development of novel vaccines during the clinical trial phases as well as product transfer to the manufacturing sites. Additionally, Martin serves on the board of Sunshine Pals Ministries, a non-profit with a mission to meet the physical, social, educational, and spiritual needs of children in Mozambique and Philadelphia.

The Carl T. Humphrey Memorial Award: Presented in memory of the College’s first dean, Carl T. Humphrey (1920-1938), this award recognizes the professional achievements of an alumnus who earned a master’s degree from the College more than five years ago. The 2019 recipient is Dr. Lawrence J. Scally ’83 EE, ’85 MSEE, ’06 MBA, co-founder and president/CTO of Colorado Engineering, Inc. Dr. Scally is a member of the engineering advisory board, a guest speaker in Villanova’s engineering entrepreneurship program, and his company has supported senior capstone design projects.

The J. Stanley Morehouse Memorial Award: Presented in memory of Dean J. Stanley Morehouse (1938-1961), this award recognizes outstanding leadership at the highest level. The 2019 recipient is Susan M. Ward ’80 ChE, who has served as a senior executive with Shell Oil Company since 2007 and as Head, M&A and Commercial Finance – Americas since 2010. Ward is also a trustee and vice chairman of the board of trustees of the Shell Pension Trust and chairman of its investment committee for retirement funds. With her husband Patrick Cunningham, Ward established the endowed engineering lecture series to offer students exposure to experts from various engineering fields and educational opportunities outside of the classroom. They recently established a new endowment for the Career Compass program to support the director’s position and supported the Clare Boothe Luce professorship initiative. Susan was appointed to Villanova University’s Board of Trustees in 2018.

Meritorious service awards are presented to alumni who have provided continuing support to the College of Engineering. This year’s honored alumni are: