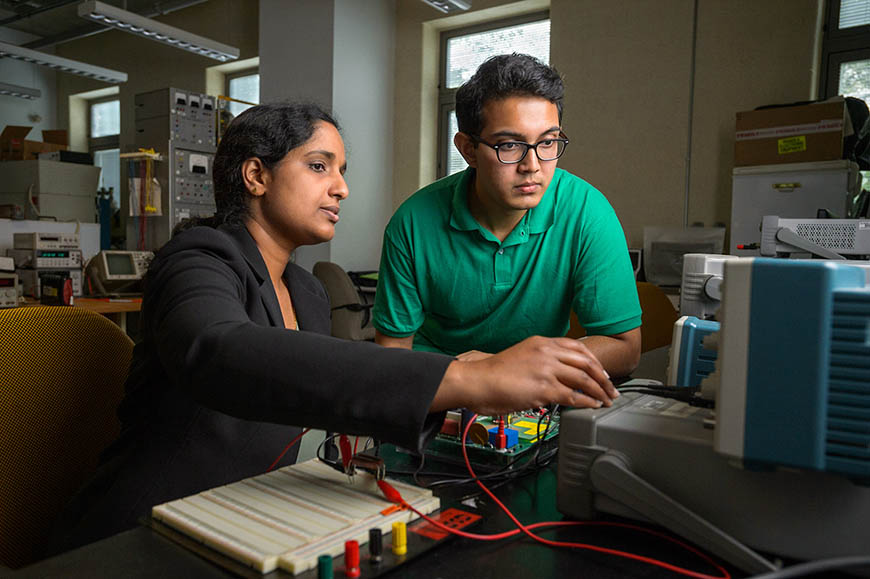 Dr. Nisha Kondrath, assistant professor of Electrical and Computer Engineering, is a specialist in the field of power electronics and analog electronics. Recently, EnerSys, a Reading, Pa., company that manufactures batteries for multiple applications, enlisted her help in developing a DC-microgrid for battery charging.

Describing a scenario in which industrial loads such as forklifts are powered by battery packs to increase productivity and reduce downtime in warehouses, Dr. Kondrath explains that the recharging demands of these batteries may put “a huge strain on the utility grid.” To alleviate this load, a large stationary battery bank, constantly trickle charged from the utility grid, can be used to supply the load when needed. This battery bank can also serve as reserve power for peak shaving (a technique that is used to reduce electrical power consumption during periods of maximum demand on the power utility) or when the grid is offline. “Therefore,” Dr. Kondrath says, “battery-charging interfaces should be capable of bidirectional power flow, facilitating power flow from the grid to the battery bank when the battery is charging and from the battery to the grid when the battery bank is used as reserve power.” This is where her expertise is being put to use. She notes, “A modular design for the chargers is expected to increase efficiency at wide load ranges, provide better grid integration, as well as improve flexibility, ease of maintenance and resilience. However, it also increases complexity, cost and volume.” Dr. Kondrath’s role in the project is to investigate the stability, peak shaving and load sharing of the system in response to these issues.

Using MATLAB and PLECS (a software tool for system-level simulations of electrical circuits), Dr. Kondrath is building a system level model and performing extensive simulations to investigate the interaction between different charger modules, load and the dc cable, which connects the battery modules in the battery bank. Two second year Electrical Engineering master’s students—Arafat Hasnain ’17 EE and Victor Daldegan Paduani—are assisting Dr. Kondrath in the design and simulation of the system in the College of Engineering’s Sustainable Energy Research Laboratory.