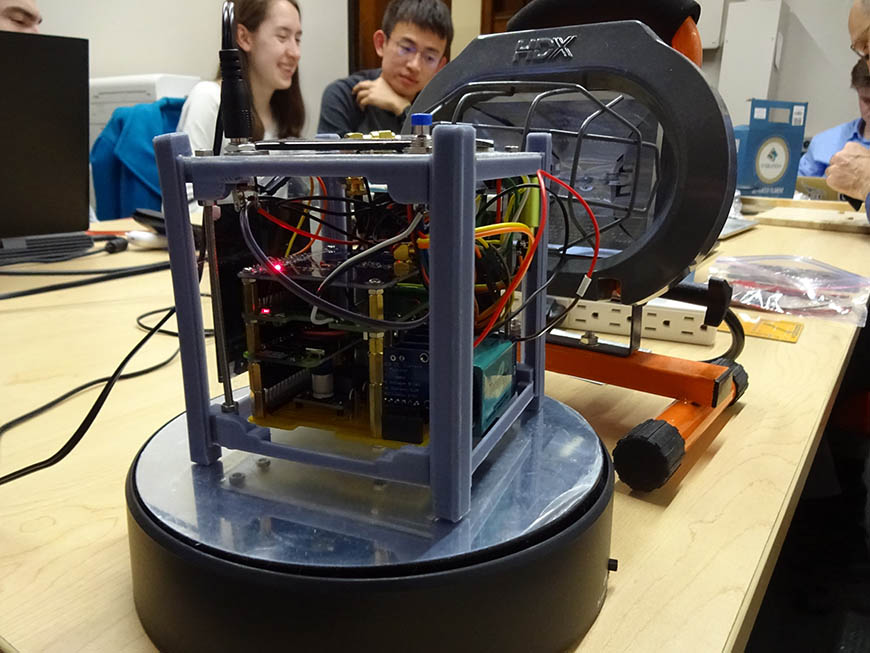 A new Villanova College of Engineering student organization has formed this year—the CubeSat Club. Dr. Alan Johnston, associate teaching professor of Electrical and Computer Engineering, is the faculty advisor working alongside the Radio Amateur Satellite Corporation, a not-for-profit group that has been building and launching ham radio satellites for fifty years. Dr. Johnston volunteers with AMSAT as the vice president for education outreach. The CubeSat Club is aimed at introducing students to CubeSats and satellite technology and meets on Wednesdays in Tolentine 421 from 5-7 PM.

A CubeSat is a nanosatellite; a small, lightweight satellite that is cheaper to build and launch than a conventional satellite. They can be launched from rockets, or occasionally from the International Space Station by astronauts. CubeSats send telemetry information—measurements communicated at remote points by automated processes—over radio signals received on earth by a ground station.

CubeSats are a great way for students to learn about space science and engineering. For example, students can learn about orbital mechanics by tracking satellites in orbit. Through receiving and decoding telemetry information from a CubeSat, students can learn about the conditions in space and about energy production via solar cells, storage in batteries, and use in radios and other circuits. Space is a growing industry, with many existing and startup companies launching constellations of CubeSats for research and commercial purposes.

Some of the club’s projects include:

Short-term, the club is working to support CubeSat-related undergraduate projects at Villanova and build a working-knowledge of the field. For example, the club is supporting the development of a CubeSat mini-project for the ECE-1205 ECE Freshman Projects course later this spring. Club members are planning to do a CubeSat related Capstone Design Project as well.

A long-term goal is to participate in an actual CubeSat mission to space, perhaps in partnership with another university or organization. However, this a major undertaking and may not happen for several years.