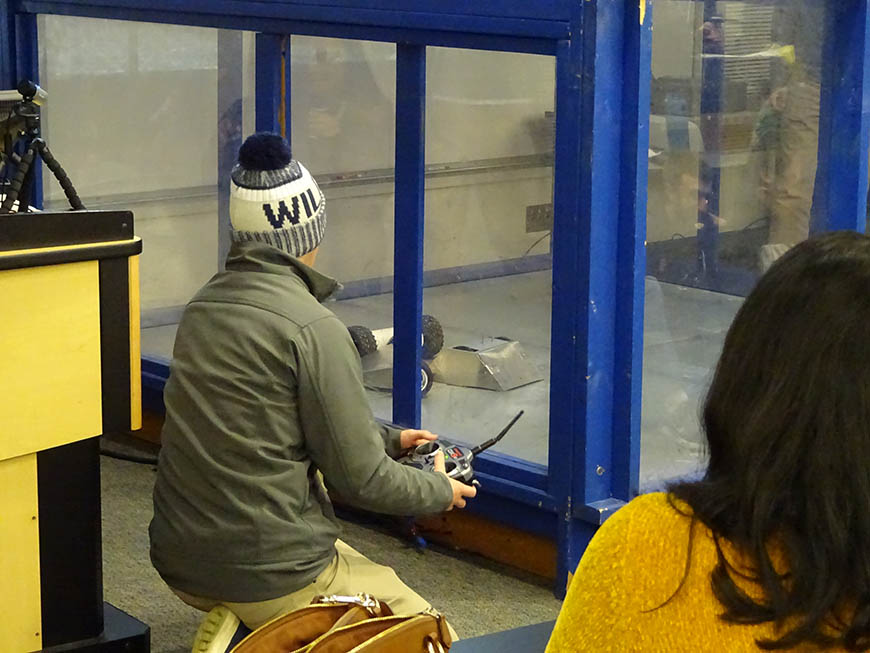 On December 5, the Center for Engineering Education and Research was rocked with the cries of students and the sound of robots being crushed and shredded. Teams of mechanical engineering majors—150 students—pitted their Beetlebots against each other in an arena-style fight to the death.

Every year, sophomore mechanical engineering students are tasked with building a robot capable of destroying the competition, while not getting destroyed themselves. Students are given the essentials, from motors to a wireless controller, to build their beetlebots, and everything else is manufactured by the students; with the help of machine shop staff and instructors. According to Assistant Professor of the Practice Deeksha Seth, “The beetlebot project gives students experience in building something dynamic, and for many students the project is their introduction to learning how things move.”

Each battle in the competition lasts no longer than three minutes, starting off with three teams competing at a time before moving into an elimination-style bracket. After one minute of dueling, the “destruction blades” are activated—blades in opposite corners of the ring spinning fast enough to tear a bot to pieces and throw its remains across the arena. Most battles ended after one or more bots were pushed into the blades, but more evenly matched rounds were judged on the level of aggression teams used. The most aggressive bot wins, provided it is still functioning at the end of the round.

To give the finalists time to repair their bots, an impromptu royal rumble was held. Any student with a functional bot was welcome to place it in the arena. Eleven bots entered the arena, and only three could function, to some extent, by the end.

Teams competed for the chance at four awards: Most Entertaining Bot, Most Creative Bot, Best Visiting Bot and overall Champions.

Despite the destruction of the beetlebots, CEER 001 was filled with the kind of excitement, laughter, and shouting you only find during the most anticipated sporting events. Beetlebots 2018 was a resounding success.