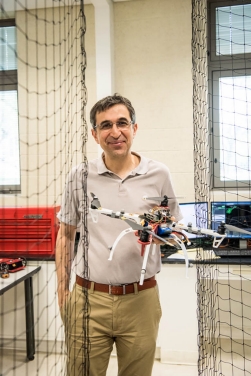 Villanova University Mechanical Engineering Professor Hashem Ashrafiuon, PhD, and Associate Professor Sergey Nersesov, PhD, are conducting research in the field of autonomous vehicles. Their new project, “Robust Control of Networks of Heterogeneous Nonholonomic Vehicles in Uncertain Environments,” received a three-year, $336,043 grant from the Office of Naval Research and reflects the professors’ expertise in nonlinear dynamics and control. The topic has gained increasing attention both in the robotics and the control communities, due to the need for autonomous control of more than one type of robotic agent in the same workspace. Their potential application in military missions is of particular interest, and researchers are looking at networks of nonlinear heterogeneous agents in order to include more realistic conditions where individual agent constraints and capabilities may limit, expand or otherwise significantly affect the overall system performance.

The main application and potential growth in the area of nonholonomic multi-agent systems (those whose state depends on the path taken in order to achieve it) is cooperative control of networks of heterogeneous air, surface and underwater marine, and ground vehicles. Dr. Ashrafiuon, who serves as principal investigator on the project, explains the limitations of these systems and the goals of their research: “Lack of control authority due to varying degrees of nonholonomicity and other physical constraints, as well as heterogeneous nature of participating agents, require new robust coordinated network control, trajectory planning and low-level tracking control approaches.” He describes a possible scenario: “Coordinated landing of aircrafts on a ship at high sea states is one example where such approach can be effectively implemented utilizing its capability to address environmental disturbances, physical constraints of the vehicles, and decentralized relative sensing and control.”

Drs. Ashrafiuon and Nersesov will specifically focus on applications such as coordinated shipboard landings, collaborative missions involving surface and underwater marine and air vehicles, and formation flying for ensembles of heterogeneous unmanned air vehicles including unmanned aerial refueling.  Proof of concept experimental validation of the theoretical results of their research will be performed at the College of Engineering’s state-of-the-art facilities that include a fully equipped pool for marine vessels, and the Heterogeneous Autonomous Vehicle Laboratory, which offers precise 3-D positioning capabilities for air and ground vehicles.