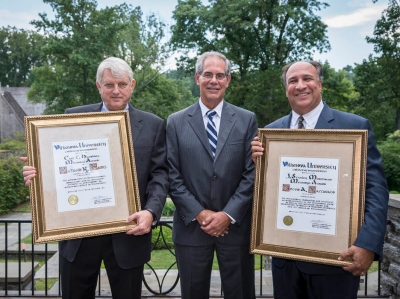 Richard K. Faris ’69 CE, ’70 MSCE, recipient of the Carl T. Humphrey Award; with Dean Gary A. Gabriele; and Anthony Naccarato ’88 CE who accepted the J. Stanley Morehouse Award on behalf of his father, Peter ’65 CE, who was unable to attend.

On September 5, the Villanova University Engineering Alumni Society (EAS) hosted its 38th annual Engineering Alumni Awards reception. More than 100 guests joined the festivities to recognize recipients of the 2014 awards, which are presented to alumni who exemplify service, leadership, excellence, stewardship and technical advancement in the field of engineering.

Four of the alumni awards are named in honor of the College of Engineering’s past deans:

The J. Stanley Morehouse Memorial Award: Presented in memory of J. Stanley Morehouse, Dean of the College of Engineering from 1938 to 1961, this award recognizes outstanding leadership at the highest level. The 2014 recipient is Peter A. Naccarato ’65 CE, retired principal of O’Donnell & Naccarato, the firm he co-founded with classmate William F. O’Donnell ’65 CE. Unable to attend the reception, Mr. Naccarato’s son Anthony ’88 CE accepted the award on his father’s behalf.

The John J. Gallen Memorial Award: Presented in honor of John J. Gallen, Dean of the College of Engineering from 1961 to 1975, this award recognizes the technical achievements of an alumnus who graduated from the College less than 15 years ago. The 2014 recipient is John C. Duda, PhD, ’07 ME. Dr. Duda is a senior development engineer at Seagate Technology in Minneapolis.

The Carl T. Humphrey Memorial Award: Presented in memory of Carl T. Humphrey, who served as the first Dean of the College of Engineering from 1920 to 1938, this award recognizes the professional achievements of an alumnus who earned a master’s degree from the College more than 5 years ago. The 2014 recipient is Richard K. Faris ’69 CEE, ’70 MSCE. Mr. Faris is senior vice president–customers for Oracle’s Primavera Global Business Unit. In 2008, Oracle acquired Primavera Systems, which Faris co-founded in 1983.

The Robert D. Lynch Award: Presented in honor of R.D. Lynch, Dean of the College of Engineering from 1975 to 2000, this prestigious award acknowledges a graduating senior for his or her outstanding academic achievements and exemplary dedication to serving the community. The 2014 recipient, Gregory M. Campbell ’14 ME, was presented with the award at the College’s Recognition Ceremony during Commencement weekend this past spring. Campbell began his graduate studies in robotics at Stanford University this fall.

Recognizing an individual from each of Villanova’s engineering departments, professional achievement awards were presented to:

Meritorious service awards were presented to alumni who have provided continuing support to the College of Engineering: