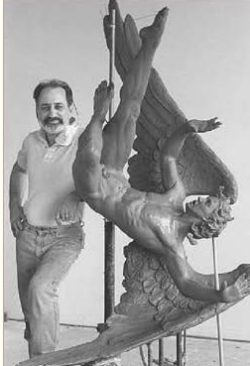 Villanova, PA – In its first exhibit of the 2016-2017 academic year, the Villanova Art Gallery will showcase the work of George Nista, a Philadelphia-area sculptor whose masterful explorations of the human figure will be collected under the title “Pursuing Beauty.” The show opens Monday, August 8. It includes approximately 40 pieces, some in bronze and some in plaster, including five three-quarter life size sculptures; several portraits; and drawings and models that illuminate the artistic process behind Nista’s work.

A free public reception to meet the artist will take place on Friday, August 12, from 5 to 7 pm in the Art Gallery located in the Connelly Center on the Villanova campus. Refreshments will be served. Convenient on-campus parking is available.

Included in “Pursuing Beauty” will be Nista’s best-known sculpture, “Paradise Lost,” a three-quarter-life size sculpture in bronze. “Paradise Lost” depicts the moment in Milton’s epic poem of the same name when Lucifer, the most beautiful of the angels, is cast out of heaven. Lucifer is inverted, captured mid-fall, every muscle engaged—a violent change of circumstance depicted with power and grace. The figure’s immense, intricate wings extend above and below him, with the entire cantilevered form supported from the tip of one wing.

According to the sculptor’s website: “Underlying this work is a consideration of the idea of human potential: its achievement, or non-achievement. What does it mean to err, to misstep, not to see? Is what seems like unlimited possibility reachable, either by effort or by destiny?”

The figure’s wings are an element that Nista employs in many of his sculptures, and though the viewer may perceive them as angelic, the sculptor is careful to clarify that these figures are not, in fact, angels: “They’re metaphors for some transcendence of the human condition or some ideal of the human condition; in other words, man fully realized.”

Nista’s piece entitled “Incandescence” is another such winged figure. The figure stands about three feet tall, balanced on one leg, head tilted and eyes closed as if in ecstasy. His wings reach upward, nearly doubling his height, serving as a metaphor, as Nista says, “for that moment of inspiration when the mind blazes with the realization of a creative idea.”

Many of Nista’s sculptures present an idealized human form. He enjoys working with dancers, whose musculature and mastery of their own physicality often results in a collaborative discovery of theme. According to Nista, “The idea doesn’t always come first: The theme may develop from a gesture that the subject makes. I’ll see it in a drawing, and from there the work expands. I don’t like to go into the studio and say, ‘Okay, do this, and hold it forever.’ That’s static to me. I like to feel it’s a dynamic process, and that things are moving and changing as I go. I think that’s how most of the best of my work has come about.”

Of course, not all of Nista’s subjects are dancers. Some of his most striking pieces are portraits, the subject’s essence captured in a thoughtful expression or a whimsical smile. At the heart of all his work is Nista’s interest in beauty and how it is expressed through the human body: “I think the body—every body—expresses [beauty] naturally. People always think you have to have a beautiful person to make a beautiful sculpture. What I have seen is that anybody can have a beautiful moment that expresses the whole human condition. Discovering that moment provides the excitement in what I do.”

George Nista’s artistic career has been a journey of continual discovery. As a boy in Hamden, CT, he was always drawing. He earned a BA in fine art from Catholic University of America, then went on to earn an MFA at the Pratt Institute in New York, NY. He also completed most of a MS Ed degree from Southern Connecticut State University. In those years, Nista was creating large, abstract, kinetic sculptures, both architectural and mechanical in nature. He describes those pieces as part of an experiment in 20th Century art: “Every young artist of any kind wants to be relevant. And I did, too, so I tried my hand at a lot of different things.”

After embarking on a teaching career at a high school in New York, NY, Nista and his then fiancée (now wife) relocated to Philadelphia, where he continued to teach high school and pursue his own art. He found himself unfulfilled by kinetic sculpture and began to transition to other kinds of 3D art, especially set design for theatre and film. But though set design offered its own rewards, Nista still felt, as he says, “fairly far afield of what truly made me happy.”

In 1984, Nista’s wife suggested he take a drawing course at the Pennsylvania Academy of Fine Art (PAFA), “just for fun.” Little did he know that the course would lead to a full four years of study in PAFA’s certificate program, and the feeling of fulfillment that he had been seeking. In the course of his studies at the Pennsylvania Academy of Fine Art, he won the Ward Traveling Fellowship, the Stewartson Prize, and several other awards.

Now retired from teaching, Nista’s decades as an instructor included 22 years at the Art Institute of Philadelphia, teaching a wide variety of courses from sculpture to 3D design, to environmental (set) design. He has also taught at Drexel University, PAFA, and the New York Academy of Art’s Graduate School of Figurative Art.

After years in the studio and the classroom—both as student and teacher—Nista’s advice to the young artist is practical: “One should keep an open mind toward all kinds of work, but whatever seems to lie deepest in you, you should pursue. But you have to be good at what you do: and the only way you’re going to get good is to ask a lot of questions of people whom you think know, and then to practice it as much as you can, all the time. I can credit certain of the teachers that I have had with finally getting me to realize that I needed a certain method to do what I wanted to do. In other words, I had to be in control of my medium. It’s like anything else: It’s a trade before it’s anything else, and you have to learn your trade.”

George Nista is a sculptor in Philadelphia. He grew up in Hamden, Conn. He completed a B.A. at Catholic University of America in 1971 and an M.F.A. at Pratt Institute in 1979. He later attended the Pennsylvania Academy of Fine art and earned a Certificate in 1998, winning the Ward Traveling Fellowship, the Stewartson Prize, and several other awards. Now retired from teaching, he has taught in the Sculpture Department at the Pennsylvania Academy of Fine Art; and for more than 20 years in the Industrial Design Department of the Art Institute of Philadelphia.

George has traveled through much of Europe and has been to Italy several times. His major influences are Italian Renaissance and Baroque sculptors, especially Michelangelo and Bernini. His sculpture and drawings are mainly of the human figure and he works from live models (most of whom are professional dancers.)

The Villanova University Art Gallery is open weekdays from 9 a.m. -11 p.m. For extended and weekend hours, and other information, contact the Art Gallery at (610) 519-4612. More information is available on the Gallery's Website.