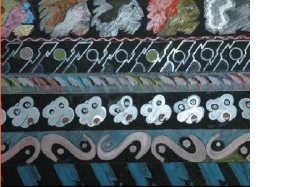 Villanova, PA – When Desmond (Des) McLean – whose 'Strata' paintings are next up at the Villanova University Art Gallery – was an aspiring young artist in the 1940s,  60 percent of all Americans went to the movies every week,  the most envied family on the block was the one with the television set, and the digital revolution was on the far horizon.
Today, only 10 percent of the population shares the weekly movie-going experience, nearly all Americans have their entertainment home-delivered via the 2.5 television sets that are in today's average American home, and non-realistic art has fallen victim to the ‘eye candy’ of digital devices, laments McLean, an unrepentant abstractionist.
“We are an entertainment-centered culture hooked on celebrity. Illiteracy is on the rise – it is currently estimated to exceed 30 percent of the population – and critical thinking is on the run. We are flooded with the 'eye and ear candy' of television, digital photography, cyber games, Internet tweeting/IM-ing, cell phone ubiquity, comic book-based movies, MTV, incessant iPod music, all of which further alienates the possibility of fine arts,” notes the transplanted New Yorker, now a South Jersey resident.
That doesn't keep the retired Rowan University art professor from stubbornly exhibiting his art. His most recent work, the mixed-media paintings of his 'Strata' series, may be viewed at his solo exhibition, “Easelfumes”, opening Friday, February 26, in Villanova University's Art Gallery.
A reception to meet the artist will take place Friday, March 12, from 5 to 7 pm. in the art gallery, which is located in the Connelly Center on the Villanova campus. Refreshments will be served. Gallery exhibits and receptions are free and open to the public. The exhibit continues to April 8.
In McLean's current Strata paintings, images are layered in parallel, top to bottom. As but one part of the whole, each image, “presents the viewer with the opportunity to ponder a heightened reality when the whole is considered.”
Widely read and analytical, McLean does not attempt to explain or define his art. Since intuition plays such a large part in his modus operandi, he notes, his take on his own art would alienate the viewer’s own experience.
“I proceed according to the epiphanies my psyche presents in the process of creating a work. It is those epiphanies that delight me, provide a constant fuel and a driving search for further awakenings,” he says.
In McLean's view, the modern period of art is ‘old hat’. “Painting doesn't merely compete with photography today; the glut of media selling us, amusing us, and dazing us leaves an insignificant fragment of 'information space' for fine art's visual language,” he says.
McLean mixes images from mass culture, art, history, myth, advertising, and scientific issues. His mediums include pastel, acrylic paints, water colors, inks, computer graphics, collage, encaustic, digital photography, and stenciling. He employs repetition to extend the confines of the format.
McLean's artistic journeys over the years have taken him from photographic realism (He studied film at the City College of New York.) to Abstract Expressionism. At Hunter College, he studied with leaders in the Abstract Expressionist movement, including Robert Motherwell, Richard Lippold, William Baziotes, and the printmaker, Gabor Peterdi. He was intensely impressed by Allan Kaprow, who sought to integrate art and life through his 'Happenings' performance art; and pop art sculptor George Segal. Both artists worked and lived near McLean's solar-oriented home and World War II Quonset studio in New Brunswick, NJ.
Born in Ireland, McLean grew up in Greenpoint, Brooklyn. After a brief stint in the U. S. Navy, he attended The Heatherly School of Art in London, England; and the American School of Art in New York. He earned his bachelor's degree at Keane College, NJ, and was awarded a teaching fellowship at the University of Chicago, where he (more)was enrolled in the doctoral program.
Concerned by the data that reveals that less than one percent of the U. S. population currently shows a serious interest in the development or progress of contemporary painting, McLean finds little reassurance in what he sees lying ahead:
“The digital revolution is not nearly finished. It promises a seemingly endless supply of gadgets permitting entertainment, communication and information. The great majority of Americans are satisfied with realist, decorative and nostalgic visuals which do not test the viewer. Meanwhile, aesthetic problems and debate are obscured by sports, celebrity and the shallow entertainments flooding mass culture.”

McLean retired from Rowan University’s Art Department in 2002, where he had taught for more than 35 years.

The Villanova University Art Gallery is open weekdays from 9 am to 5 pm.  For weekend and extended hours, and other information, telephone the Art Gallery at (610) 519-4612. Selected works for the McLean exhibit may be previewed on the gallery’s website at www.artgallery.villanova.edu.