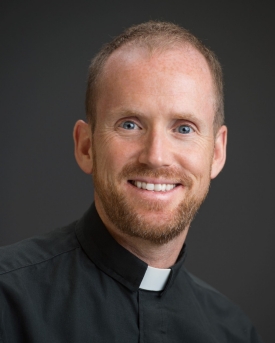 Father David, ’89 CLAS has been working at Villanova since 2004, though he sees a unique connection to his new home in CPS.

“I felt that both academically and spiritually, that this is where I want to be,” Father David said. “This is the perfect blend of my ministerial and social justice vocations, putting those skills together with academics for the first time in my career.”

His career has spanned multiple Universities, countries, and academic fields, including a twist of divine fate that led him to his current position.

Father David initially chose Villanova University because he believed he might be inclined toward a vocation to the Augustinian priesthood after his time at Monsignor Bonner High School. After graduating from Villanova in 1989 as a Theatre major, he was unsure of his next move. Delaying his calling to the religious life, Father David moved to New York City to chase his dream of acting on Broadway.

During a run as an actor in New York and in touring productions that included more than a dozen professional shows, Father David attended Mass in St. Louis, Missouri while working on a play there. That Mass included an appeal from an Augustinian priest for parishioners to support missionary work. The Augustinian who spoke happened to be one of Father David’s former teachers from Monsignor Bonner. He took this as his sign of his vocation to the priesthood. He’d return to the Philadelphia area to answer his calling to the religious life.

Father David was greeted at Villanova by a former professor of his, then the chair of the Theatre department, now University President Father Peter Donohue, who welcomed his former student with open arms.

After joining the Augustinian order in 1993, Father David studied at the Washington Theological Union, Catholic University, and Trinity College, before returning to Villanova in 2004. Since then, he has taught within and chaired the Theatre Department and worked as the Novice Director for incoming Augustinians.

In his new role within CPS, Father David sees a chance to make a real difference in the culture and the trajectory of the College.

“There are so many opportunities for creativity in vision.”

He specifically cites the unique backstory and educational experience of every CPS student as an area of opportunity.

“CPS, rather than a linear classification of where people are in life, is much more circular,” Father David says. “It involves people of all different areas of life that share one thing in common. For one reason or another, their path was not as simple or ordinary as other people’s paths. That’s not just Villanova doing something for them, but it’s them grounding us in Unitas, Veritas, and Caritas.”

In the spirit of Villanova’s Augustinian values, Father David sees his work within CPS as a chance to engage with a variety of students.

“In this day and age, where we are finally beginning to take on issues of equity and inclusion,” he explained, “CPS has a chance to reach out to include people that may have otherwise found it difficult to reach out towards Villanova.”

While his background in the priesthood will act as a foundation in his new position, Father David’s academic experience will be vital as he creates progress and change within CPS.

“While mission underlies everything that CPS does, I get the opportunity in this role to also focus on strategic initiatives. One initiative that I’d like to focus on is going beyond a community of learners and into finding ways to have the constituents of CPS have their spiritual journey grown, even if their CPS experience is entirely remote.”

Father David sees an avenue for CPS to connect with the entire Villanova community as the higher education and professional worlds continue to shift.

“There is great opportunity to keep traditional Villanova undergraduates connected with Villanova through CPS, in relationship to what we know about current career trajectories. Most young people will change roles and need to re-tool and develop new skills to reach their career objectives.”

Father David joins CPS at a vital time in the college’s history, well aware of the opportunity that lies ahead for CPS and the role he’ll be forging in the coming years.

“I believe that higher education is going to change drastically in the next 25 years, and I think CPS has a chance to be a leader in the flexibility model that will be more prominent.”