On Tuesday, May 5, during the College of Professional Studies’ Annual Awards and Graduate Recognition Event, three of the college’s highest achieving students were honored with the 2021 Medallion of Academic Excellence. Brittni Jones, Erica Howard, and Robert Lyons were each awarded for their exemplary performance in their pursuit of their Bachelor’s degrees. 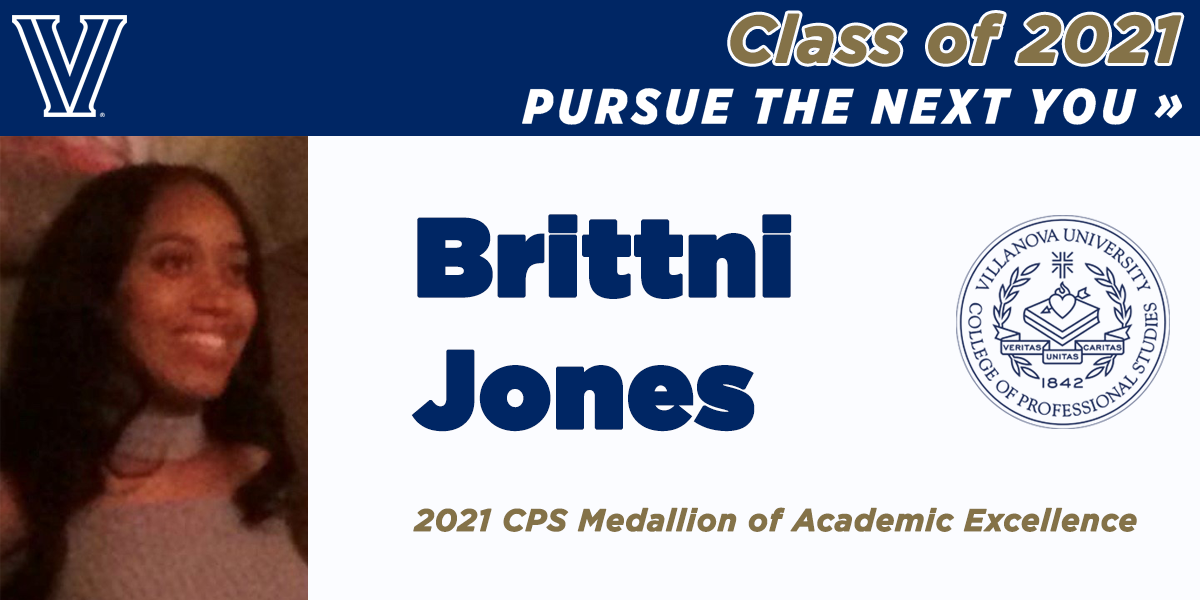 Like many other CPS students, Brittni Jones found her way to Villanova in an untraditional way.

She was enrolled as a student at Seton Hall University in 2018 when she learned she was pregnant with her son. The physical toll of walking around campus to every class became a burden and led to some complications with Brittni’s health. Unable to adjust her schedule as needed, Brittni chose to pursue a new option.

“I was actually a senior (at Seton Hall) and was planning to graduate that Spring. I ended up transferring to Villanova instead,” Jones said. “Villanova took me under their wing. They made sure that I could still do my classes and I didn’t need to be on campus.”

After enrolling at CPS, Brittni has been able to accomplish her goals, thanks to the support system she’s found at Villanova.

“Since I’ve been here, it’s been nothing but support. It’s such a blessing to be at a school where they understand that life happens. Family is important, and they value family. They value me being a student-parent and also trying to juggle work. They still find ways to help me be successful. I don’t know where I’d be if I didn’t transfer to Villanova. ..having this avenue to finish my degree while being a mom was so important to me.”

Brittni specifically credits her advisors and professors for their help in making the transition and succeed at Villanova, earning her the 2021 Medallion of Academic Excellence.

“Coming into Villanova, it was extremely important I stayed on top of what classes I needed and my advisors were monumental in making sure that these classes were best for me,” she explained. “Whether I need recommendations or life advice, my professors and advisors have taken the time, even outside of class, to help me. I have their personal phone numbers. They really helped me get to this point as a student and a mother. I’ll be forever grateful for them. I can’t stress how Villanova has been a part of my story.”

These relationships have inspired Brittni to follow her dream of attending law school and becoming an attorney, a goal she says has been on her mind since she was just five-years old.

“I’ve never been at a school with more of a family environment,” she said of CPS. When asked about graduation, Brittni Jones was filled with emotion, saying, “I get to the point where I get teary eyed because I know how hard I’ve worked for this and CPS pushed me further toward my goals.” 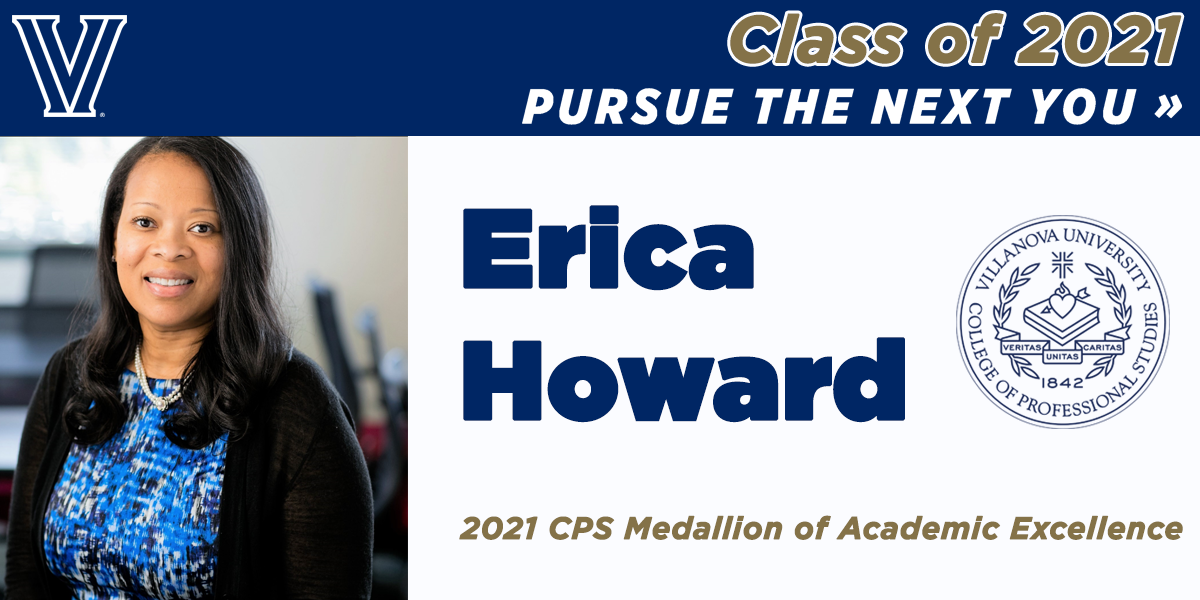 After receiving her GED and working toward an Associate’s degree, while raising a family and working full-time, Erica Howard still had a desire to continue her education.

“Getting a college degree was always something nagging at me,” Erica said. In 2021, she not only will have earned her bachelor’s degree but will have done so while earning the CPS Medallion of Academic Excellence.

As a mother of three, including a son working towards his high school diploma, Erica had the necessary motivation to commit to her education and complete her degree.

“I took a class here, a class there, but then I got super motivated the last two years or so, because my son is a junior in high school and I did not want to take any light away from his accomplishment next year.”

Erica looks to her degree as both a tool for her future and a reason to celebrate in and of itself, saying “There’s a sense of self accomplishment.”

Looking to her career, Erica sees the potential for great things in her future, adding, “Once I got back in the work force, I got my Associate’s degree and had a career, but now I’m on the management track.”

After many years working in IT, Erica’s goals are now limitless.

“I do have ambitions to be a Chief Information Officer (CIO) at an organization. I have a thirst for data. I like understanding data and information.”

Erica cites her CPS education as an inspiration for the new heights she hopes to reach in her career.

“Every course I’ve taken and every instructor I’ve had has been committed to my success. I really feel like Villanova was a partner in helping me achieve my goals.” 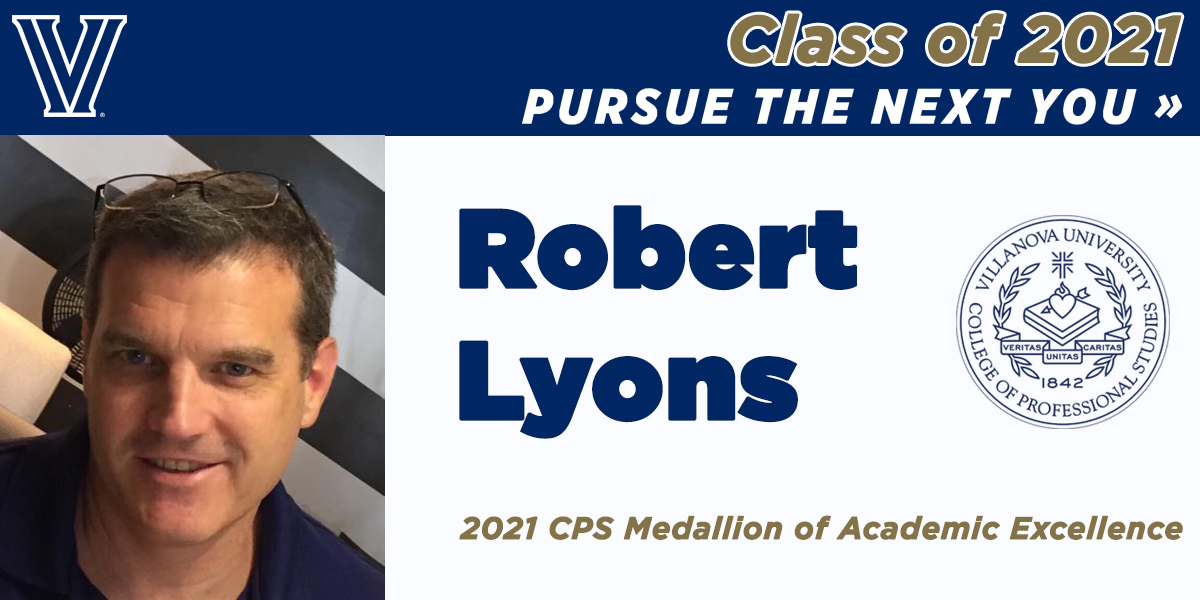 For Robert Lyons, receiving his Bachelor’s degree from Villanova was a lifelong goal that he worked to achieve while building a successful career in project management. Now, he’s not only earned his degree, with his final classes completed in the summer of 2020, but he has now also won the CPS Medallion of Academic Excellence for his work in the classroom.

“For me, while it was nice to learn things that reinforced or added to the things I do in my work,” Lyons said, “It was always more about the accomplishment of being a graduate. Checking that box was very important to me.”

He knows how special a Villanova education can be. Robert’s wife is a Wildcat, as are two of his three children.

As a learner who returned to school later in life with an established career, Lyons saw the opportunity to study in CPS as  primarily a personal achievement. “A professor asked our class for our five and ten-year career plans, and unlike many of my classmates, my ten-year plan was to prepare for retirement.”

As he works toward that long-term goal, his Bachelor’s degree will help Robert in the short-term as his career continues. Having earned his degree in Interdisciplinary Studies with a major in Leadership, Robert will be able to put his CPS education to action in his current position as an IT Project Manager for Airgas.