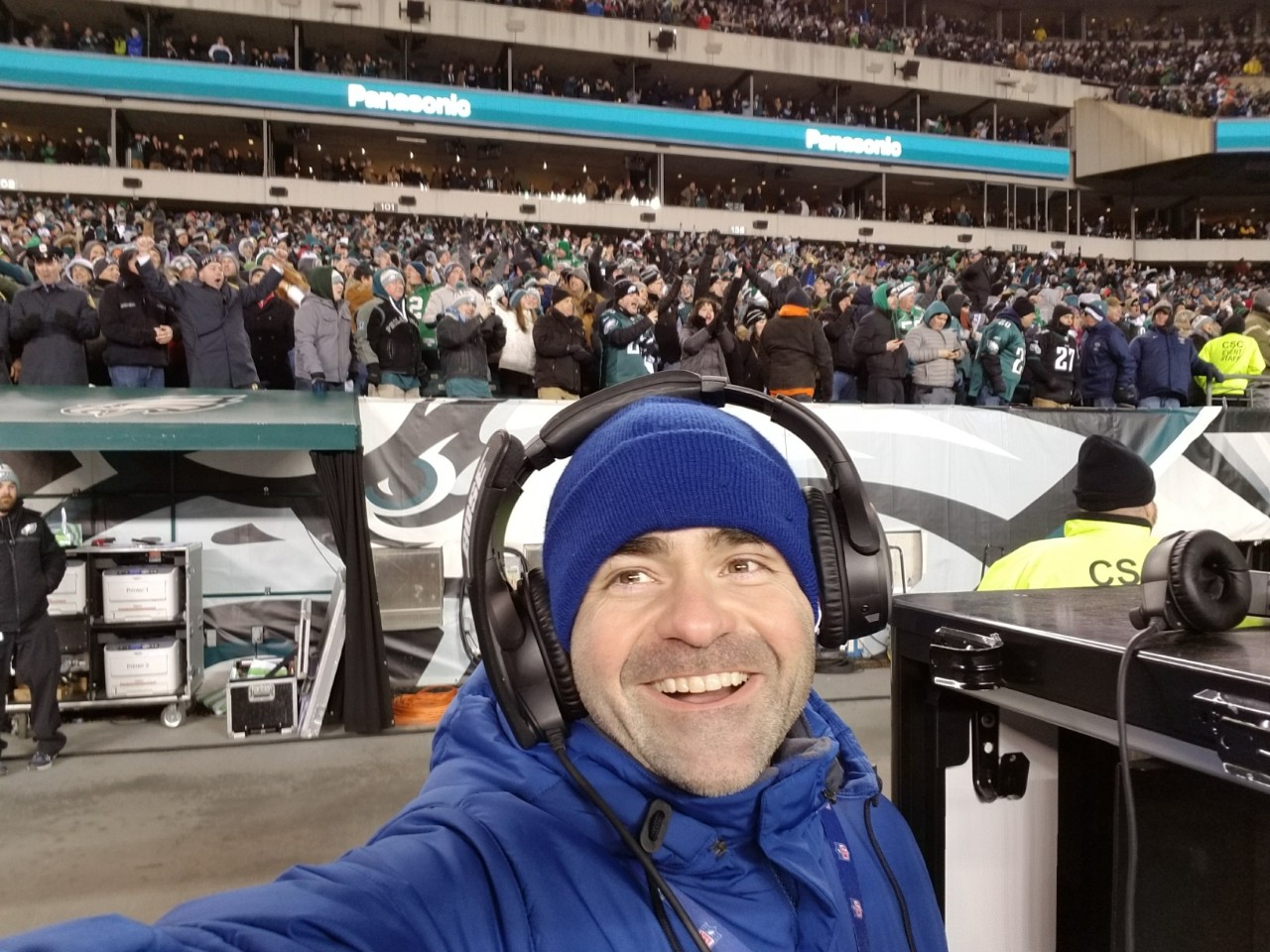 Ron Tedesco has a successful career as the Director of IT for a national health benefits plan. He’s also a part-time student in the College of Professional Studies Bachelor’s in Information Systems degree program. But Ron doesn’t stop there—he also has what some would call a “dream job” with the National Football League that takes him to the sidelines of Lincoln Financial Field for every Philadelphia Eagles home game.

During each NFL game, two certified athletic trainers (ATC spotters)—retained by the league and unaffiliated with any NFL teams—are positioned in a “spotter” booth, overseeing the field, to monitor the field and broadcast and help identify potential player injuries. Ron, also unaffiliated with any team, serves as an Injury Video Review Field Technician and supports the medical team during this process. He is one of many important aspects that make up the Game Day Concussion Diagnosis and Management Protocol, which was started in 2011 to identify and treat players who potentially obtain concussions during the course of a game.

The process for the ATC Spotters is not just as simple as watching the game to account for hard hits. There is also technology that aids the staff. Ron describes what he does as “a second version of instant replay dedicated to injury review and player health.” Members of the staff sit in the booth to review game action and add metadata to the video where there are concerning hits, players who are slow to get up, players who may look injured on the sideline, etc. This metadata helps to quickly jump to a specific play so that the medical staff can review the video and determine if a player might need to be evaluated for a concussion or when an injury may have occurred. Ron says, “My job is to support the resources to allow the medical teams to initiate and follow through with the NFL’s concussion protocol on the sidelines.”

In the five seasons Ron has worked for the NFL, he has seen a definite increase in the focus on safety and on concussions. “Awareness of concussions and the long-term damage they can cause to a player’s mind and body has made enforcing the NFL’s protocol critical for player safety. The entire game is recorded so every potential head trauma and damaging hit can be reviewed in detail to help diagnose the injury effectively. This gives the medical staff and team physician’s clear insight into what occurred on the field. We are doing everything we can to ensure the safety of the players.”

We’ll be looking for Ron on the sidelines next season! Keep up the good work!