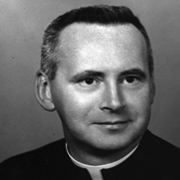 Father Robert Joseph Welsh was born in Philadelphia, Pennsylvania, to Robert Welsh and Elizabeth Walpole on 15 July 1921. He had one brother and four sisters. Baptized in the church of Saint Agatha in Philadelphia on 7 August 1921, he began his education in that parish. After finishing grammar school he attended West Catholic High School in Philadelphia, from which he graduated in 1938. After a semester at La Salle College in Philadelphia, he transferred to Augustinian Academy, the Preparatory Seminary on Staten Island, New York, as a post-graduate student. In September 1939, he was received as a novice and spent a year at Our Mother of Good Counsel Novitiate, where on 10 September 1940, he professed simple vows. Three years later, at Saint Mary's Hall, the Augustinian collegiate seminary on the Campus of Villanova College in Pennsylvania, he professed solemn vows. He graduated from Villanova in 1943 with an A.B. degree and began his study of theology at Augustinian College in Washington, D.C. During the summer months he took graduate courses in English at the nearby Catholic University of America. On 11 February 1947 he was ordained to the priesthood at the National Shrine of the Immaculate Conception in Washington, D.C. Following ordination, he was sent to Collegio Santa Monica, the Augustinian international house of studies in Rome, Italy. There he began graduate studies in theology at the Gregorian University. In 1948 he earned an S.T.L., degree and two years later was awarded an S.T.D. cum laude.

A very private person, Father endured with patience the discomfort associated with the treatment of his final illness giving all with whom he was associated an example of Christian suffering. At his death Father Welsh was survived by two sisters, one of whom was an invalid, whom he had continued to visit even as his own health failed.

A Mass of Christian Burial was celebrated at Saint Thomas of Villanova Church on 11 November 1992. Father Edmund J. Dobbin, O.S.A., then President of Villanova University, delivered the homily. The following day the interment took place in the Augustinian plot of Calvary Cemetery in West Conshohocken, Pennsylvania.