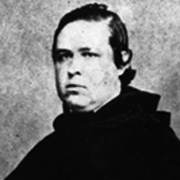 Father Patrick Stanton was born in Castlebar, County Mayo, Ireland, in 1826 and was a nephew of Reverend Thomas A. Kyle, O.S.A.

He first came to the United States in 1841, but the next year returned to Europe to make his novitiate at Tolentine, Italy. He studied for a time at Perugia and was ordained a sub-deacon by Cardinal Pecci, who later becomes Pope Leo XIII. He returned to the United States in 1847 and was ordained to the priesthood in 1848 at Saint Augustine's Church in Philadelphia, Pennsylvania, by Bishop Francis Patrick Kenrick.

Father Stanton served at both Saint Augustine's and Villanova College. In 1858, he was appointed Commissary Provincial of the American Augustinians, an office he held until 1866. In 1859, he took up residence at Saint Augustine's, Philadelphia, where he lived until 1869, when he became President of Villanova College. He held that post until 1872. Two years later, in 1874, he was appointed Commissary General to preside at the first Chapter of the Province of Saint Thomas of Villanova. He also served on the Commission for the Revision of Rules and Discipline.

Pope Leo XIII, in 1884, appointed Father Stanton to act as Socius and Secretary to Monsignor Sepiacci, the papal delegate to the Third Plenary Council of Baltimore, where Father Stanton served as theologian and notary. In 1886 he was appointed Advocatus Diaboli in the cause of Bishop John Neumann.