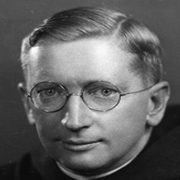 Father Edward Valentine Stanford, a native of Boston, Massachusetts, entered the Augustinian Order in 1917 after completing three years at Boston College, Chestnut Hill, Massachusetts. He was ordained in Philadelphia by His Eminence Denis Cardinal Dougherty on 10 June 1922.

Father Stanford's first assignment was to Villanova College, in 1923, as teacher of Descriptive Geometry. Later on he assumed the duties of chaplain of the College. After nine years as chaplain he was appointed the 23rd President of Villanova College. In 1940 he was elected President of the Association of American Colleges. Noted as an administrator, he served during World War II as an advisory-board member of the War Manpower Commission.

In 1944 Father Stanford was appointed Prior and Rector of Augustinian College in Washington, D.C. It was during his term there that he helped organize, and acted as secretary of, the Catholic Commission for Intellectual and Cultural Affairs, a group of learned and famous Catholic scholars. In 1950 Father Stanford moved to Archbishop Carroll High School in Washington, D.C., as the schools' first Principal and Superior of the Augustinian Community there. He was principal there for nine years.

In 1959 Father Stanford was assigned to Saint Mary's Hall, Villanova, Pennsylvania, and was given the opportunity to devote his time to educational pursuits and writing. Father was the author of several books including A Guide to Catholic College Administration. He held honorary degrees from the University of Pennsylvania, Saint John's University, Loyola University of Chicago, and Boston College.

At the time of his death, he was serving as an administrative consultant to the Association of American Colleges. Father had been attending a Board of Trustees meeting at Biscayne College in Opa-Locka, Florida, and was preparing to return to Philadelphia, when he took ill and died at the Rectory of the Church of the Resurrection of Our Lord in Dania, Florida, on 17 February 1966 at the age of 69. He is buried at the Augustinian Community cemetery at Villanova University.