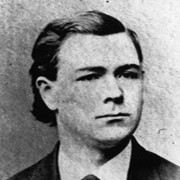 Father Francis Michael Sheeran was born in County Tyrone, Ireland, in 1840. He received his high school education in Philadelphia, Pennsylvania, and came to Villanova in 1857. In 1858, with Father Thomas Cooke Middleton, he entered the Augustinian novitiate at Tolentine, Italy, and was ordained to the priesthood in Rome, in 1863.

Father Sheeran returned to the United States in 1865 and was stationed, first at Villanova, and then at Saint Augustine's in Philadelphia, Pennsylvania. From 1886-1898, he was President of Villanova College, and then Master of Novices and of professed students of his Order, and afterwards was Prior of the Augustinian community and Pastor of Saint Thomas of Villanova Church. Later he served at Saint Denis' in Ardmore, Pennsylvania; at Saint Augustine's in Philadelphia; at Saint Nicholas' in Atlantic City, New Jersey, and at Our Mother of Consolation in Chestnut Hill, Pennsylvania.

He died at Villanova on 19 January 1912, at the age of 72, and is buried in the Augustinian Community Cemetery there.