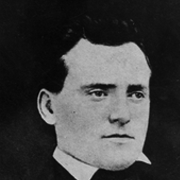 Father John Possidius O'Dwyer was born in Callan, County Kilkenny, Ireland, in 1816. His early education in Kilkenny led to his entrance into the Augustinian novitiate at Grantstown, Wexford, in 1835. After his profession of vows in 1836 he was sent to Italy for higher studies.

He was assigned by the Augustinian Prior General to the Studium at Perugia, Italy where in 1839 he was ordained to the priesthood. After his ordination and a brief return to Ireland he was sent to Philadelphia, where he arrived in the late summer of 1840.

After two years of labor at Saint Augustine's Church there, he returned to Italy to recover his endangered health. On his return in the summer 1843, he with the permission of the Prior General brought with him to America, Father Francis Ashe of the Irish Province and William Harnett (then a sub-deacon -- the first native born American vocation for the Province who had been sent to Italy in 1837).

Father O'Dwyer formed the first Augustinian community at Villanova, in August 1843. He offered the first Mass there, blessed the new foundation, and placed it under the patronage of Saint Thomas of Villanova. He was the first President of the College, and taught Latin and Greek in its early years.

In 1844 he constructed the first separate building for students: a combined chapel/study hall and upper-level dormitory. And in 1848-1849 he built the east wing of the present Alumni Hall.

The destruction of Saint Augustine's Church in Philadelphia by fire in 1844, combined with the departure of Father Patrick Eugene Moriarty, the Superior, and of Father Thomas Kyle, the senior priest, left Father O'Dwyer with the enormous tasks of continuing the College, of constructing a new chapel in Philadelphia for the congregation of Saint Augustine's, and of pursuing the long, difficult legal struggle for justice against bitter opposition. The church of Saint Augustine was rebuilt during the year 1847 and 1848. Early in 1850, his health gave signs of failing, and on 2 April he entered the hospital of the Sisters of Charity in Baltimore. Despite constant care, and the spiritual assistance of Saint John Neumann, C.SS.R., then chaplain of the hospital, he died 24 May 1850, at the age of 34.

At the Provincial Council of Baltimore in 1849, he had been recommended to the Holy See, in the "terna" sent to Rome regarding the appointment of a new Bishop for the diocese of Savannah -- as being a "vir doctrina, pietate, peritia in rebus agendis plane insignis." Saint John Neumann confirmed this testimony to Father O'Dwyer's piety when he told Father Patrick Augustine Stanton, O.S.A., that "in his last illness Father O'Dwyer, in humble reverence for his Savior, insisted on not receiving the Holy Eucharist in bed but, rising and kneeling on the floor, thus would receive his Viaticum."

His ten years in America had been indeed full and fruitful. He died on 24 May 1850.