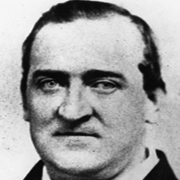 Father Ambrose Mullen was born on 12 April 1827. His place of birth has been listed as Brooklyn, New York, although it is not known with certainty where he was born. He entered the novitiate in Italy in 1843, and four years later returned to the United States. He was ordained to the priesthood in Philadelphia, Pennsylvania, by Bishop Francis X. Gartland of Savannah in 1850. Father Mullen was the younger brother of Father Edward Mullen.