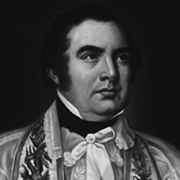 Father Patrick Eugene Moriarty was born in Ireland in 1805. He studied there at Carlow College and later in Italy, where he was ordained in Rome in 1828.

Father Moriarty spent a short time in Ireland following ordination, after which he went to the newly established Vicariate of Madras, India. There he served as Chaplain to the General Hospital Garrison at Fort St. George. Between 1832 and 1834, Father Moriarty served as a military chaplain in Lisbon, Portugal.

After refusing an Indian Bishopric, he volunteered for assignments in the United States, where he arrived in 1839. He served as Prior and Pastor of Saint Augustine's Church in Philadelphia, Pennsylvania, and also as Commissary General of the American Augustinians three times.

Before beginning his missionary activities in the United States, he had been granted a Doctorate of Divinity by Pope Gregory XVI. During his first assignment in the United States, he attended the IV and V Baltimore Councils. He also earned widespread fame as an orator and a lecturer. He spoke at the corner-stone laying, dedication and blessing of such churches as Saint Mary's in Lawrence, Massachusetts; at the Cathedral in Charlestown, South Carolina; and, in Pennsylvania at St. Mary's in Phoenixville, Saint Michael's in Chester, and Saint Philip Neri's in Philadelphia.

In 1841, he and Father Thomas Kyle negotiated the purchase of the Belle-Air Estate. In 1847, Father Moriarty went to Rome where he was appointed Assistant General. He returned to the United States in 1850 to continue his activities for the new Commissary Province. He served as President of Villanova College from 1851 to 1855. Later he served as the first Pastor of Saint Augustine's parish in Lansingburg (Troy), New York. He wrote a "Life of St. Augustine," and delivered his last lecture in the Academy of Music in Philadelphia on 17 March 1875.

Father Moriarty was seventy when he died, 10 July 1875, at Villanova, Pennsylvania. He is buried at Saint Augustine's in Philadelphia. Bishop John Quinlan of Mobile, Alabama, preached the eulogy. In a biographical sketch of Father Moriarty, the Catholic Annual stated: "There is not a man, woman or child, where Dr. Moriarty is known, who does not venerate his name and deplore his loss."

Moriarty Hall, a residence building on the Villanova University campus, is named in his honor.