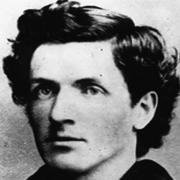 Father Francis McShane was born in Aughnocloy, Ireland, in 1846. When he first came to the United States, he lived with the Brothers of the Holy Cross in South Bend, Indiana. In 1868, he entered the Augustinian novitiate at Villanova, Pennsylvania, and was ordained a priest by Bishop James F. Wood in 1872.

For some years, including those of 1874 and 1877, he worked with the diocesan priests on the missions in Harrisburg, Centralia, and Elizabethtown in Pennsylvania; and later, on missions in Texas. For many years he was Prior and Pastor of Saint Nicholas of Tolentine, Atlantic City, New Jersey, and of Our Mother of Consolation, Chestnut Hill, Pennsylania. From 1894 to 1895, he was President of Villanova College and was then and for some time longer, a Provincial Definitor. He also served at Schaghticoke and Carthage in New York. From 1919 to 1929, he was the Superior of the new Augustinian theologate in Washington, D.C.

Father McShane died on 28 March 1932 in Misericordia Hospital in Philadelphia, Pennsylvania, on 28 March 1932, at the age of 86. He is buried in the Augustinian Community Cemetery on the Villanova campus.