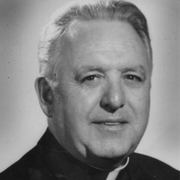 Father Francis Xavier McGuire, son of Francis and Bridget (Foley) McGuire, was born in the Bronx, New York, on November 21, 1909.  On December 5, 1909, he was baptized in Saint. Nicholas of Tolentine Church, New York.  He began his early education at Saint Nicholas of Tolentine Parochial school, St. Ann Academy, and Augustinian Academy, Staten Island, New York, where he was admitted as a postulant.  He began his novitiate at New Hamburg, New York, on September 8, 1927, professed first vows a year later, and received solemn profession on September 9, 1931.

In 1932, after graduating from Villanova College with a BA degree, he studies theology at the Gregorian University in Rome, was ordained to the priesthood in Rome on July 21, 1935, and earned his Doctorate of Divinity in 1939.

Father McGuire’s first assignment was assisting at St. James Parish in Carthage, New York.  In September 1939, he began teaching theology at Villanova College, and served as prefect of studies until 1941.  During the Provincial Chapter of 1941, Father McGuire was appointed Vice President of Villanova College and three years later, at age 34, became Villanova’s 24th president.

While President of Villanova from 1944 to 1954, Father McGuire oversaw the transformation of Villanova College from a small liberal arts college to an expanded institution of higher education, culminating in Villanova’s elevation to University status in 1953.  During Father McGuire’s tenure as President, new buildings were erected on campus to accommodate the increasing enrollment; namely, Falvey Library, Barry Hall, Dougherty Hall, the Chemical Engineering Building, the Commerce and Finance Building and Mendel Hall.  The College of Nursing, Villanova Law School, and part-time studies program were established during his presidency.  Between 1945 and 1954, the year he retired from office, he had received honorary Doctor of Law degrees from LaSalle College, and Saint Joseph University, both of Philadelphia, Pa., and Doctor of Humane Letters from Long Island University in New York.  In 1954, he directed Villanova’s Development Foundation until 1959.

Father McGuire’s career as an Augustinian priest included his call to be professor of philosophy and religious studies, while on Boards of Trustees at Villanova University and Rosemont College.  He was elected Counselor to the Provincial from 1950 to 1956.  He served on the Joint State Government Commission of Pennsylvania, and held an executive position of the Association of Naval Reserve Officer Training Colleges and Universities.

After Father McGuire left Villanova He shared his expertise in Augustinian parishes.  Parishioners remember him for his keen mind, charm and quick wit, all interwoven with a deep spirituality.  His magnetic personality developed from both his reputation as a spiritual leader and educator and the fact that, when he spoke, people listened.  They marveled at his insight, wisdom and humorous anecdotes.

In 1996, when his health began to fail, Father McGuire returned to Saint Thomas Monastery, at Villanova.  He remained in the Health Care Unite at the monastery until January 2003, when he moved to Sacred Heart Manor in Philadelphia.  Father McGruire died at the age of 93.  A Mass of Christian Burial was celebrated in Saint Thomas of Villanova Church on campus.  His body was interred at the Augustinian Cemetery on Villanova’s campus, on Thursday, May 15.