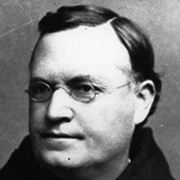 Father Christopher McEvoy was born in Queens County, Ireland, in 1840. Before coming to Villanova College in 1866, he attended Notre Dame University and Niagara College. In 1868 he entered the novitiate at Villanova, Pennsylvania, and was ordained to the priesthood by Bishop James F. Wood in 1871.

After ordination, Father McEvoy was stationed at Our Mother of Consolation in Chestnut Hill, Pennsylvania; and in 1881 he opened the first parochial school there, in the basement of the Church. From 1882 to 1890, he served as Provincial of the Province of Saint Thomas of Villanova. As Provincial, he attended the Third Plenary Council in Baltimore, Maryland, in 1884.

Father McEvoy next served at Villanova, where he was President of the College, Prior of the Augustinian Community, and Pastor of Saint Thomas of Villanova Church. He also served at Saint Denis' in Ardmore, Pennsylvania; at Saint Augustine's in Philadelphia, Pennsylvania; and, again, at Our Mother of Consolation in Chestnut Hill, Pennsylvania. Still later, he was stationed at Saint Mary's in Lawrence, Massachusetts. He was also on the mission band for a time.

On 14 December 1914, at age of 74, Father McEvoy died at Villanova. He is buried in the Augustinian Community Cemetery on campus.