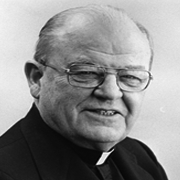 Father Edward James McCarthy was born in Troy, New York, to Edward McCarthy and Katherine Grimley on 1 April 1912. He received his early education in the public schools of Troy and Mechanicville. He entered Augustinian Academy, Staten Island, as a postulant in 1925 and was received into the Augustinian novitiate in September 1929. He professed simple vows on 11 September 1930 and three years later, solemn vows. He was graduated from Villanova College in 1934 with a bachelor's degree in philosophy. He pursued theological studies at Augustinian College, Washington, D.C.; and was ordained a priest there on 15 June 1937. After ordination he earned an M.A. (1938) and a doctorate in history from the Catholic University of America.

Father McCarthy's first assignment after ordination was to the then Villanova College as a professor of history. In June 1946 he went to the Universidad de S. Tomas de Villanueva, Havana, Cuba, as Dean and professor of history. In the school year 1947/1948 he traveled extensively throughout South American to become acquainted with its various cultures. In 1947 he returned to his teaching position at Villanova College and was named first Dean of Arts and Sciences (1948-1950) and then Dean of the Graduate and Extension Schools (1950-1953). In 1953 he returned to the Universidad de Villanueva as Academic Vice President (1953-1957), later becoming prior of the religious community (1958-1961). When the Augustinians were being expelled from Cuba in 1961, Father McCarthy and the other Augustinians, lined up in the school auditorium, thought they were going to be shot but were told instead to leave Cuba immediately. This they did with just their personal belongings. Thus ended the era of the Universidad de Villanueva in Cuba.

In 1961 the Archdiocese of Miami, then looking for a religious order to staff a college, appealed to the Augustinians who assumed sponsorship. Father McCarthy was named the first president (1961-1968). Through his efforts Biscayne College, as the college was named, was put on a solid foundation. In 1968 he was named prior of Our Mother of Good Counsel Monastery at Merrimack College serving also as chairman of the Department of History there (1968-1971) there. In 1971 he was elected president of Villanova University, a position he held until 1975. He was successful both in achieving peace and harmony on the campus and in continuing to improve the academic standards of the University.

From 1975 to 1979 Father took up parochial ministry as pastor of Resurrection Parish in Dania, Florida, and later, from 1977 to 1979, as assistant pastor of Saint Nicholas of Tolentine, Bronx, New York. But once again the academic community called upon him. From 1979-1981 he was Vice President for Academic Affairs at Merrimack College, North Andover, Massachusetts. In 1981 he was called to Villanova to serve on the governing board of the Augustinian Province of Saint Thomas of Villanova and was named Assistant Provincial. He was elected chairman of the Board of Trustees of Villanova University.

In 1990 Father was assigned to Saint Augustine Church, Casselberry, Florida. At this time he was experiencing some health difficulties for which warmer climate was thought to be better. In 1993, at the age of 81, he at the request of Archbishop McCarthy assumed the position of interim President of Saint Thomas University (formerly Biscayne College). In his usual thorough and professional manner he directed the course of the University until a new president was in place. Having personally witnessed the wisdom and dynamism of Father McCarthy, the new president kept him on as a consultant, a position he held until his final illness.

Father McCarthy died on 8 April 1996 and is buried in the Augustinian cemetery on the campus of Villanova University.