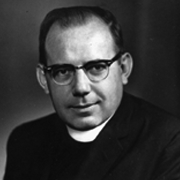 Father John A. Klekotka was born in Philadelphia on 4 February 1915. He attended James Alcorn Public School, St. Stanislaus Parochial school, and Roman Catholic High School (where he received the Latin Prize at graduation). He was awarded a Bachelor of Science Degree in Electrical Engineering from Villanova College in 1935.

Working for a while as a typist, he entered the Augustinians as a postulant in March 1936 and pronounced his first vows on 10 September 1937. He did his theological studies at Augustinian College, Washington, D.C. and was ordained to the priesthood 10 June 1941. The following year he received his Master's degree in Physics from Catholic University and began to teach at Villanova College.

At Villanova Father Klekotka served in many capacities: he was a professor of science, from 1951 to 1956, headed the Electrical Engineering School from 1954 to 1956, was Executive Coordinator of the Nursing Division from 1954 to 1959, was Director of Alumni Relations from 1957 to 1959, was for a time Director of Admissions, and from 1959 to 1965 was President of the University 1959 to 1965. He earlier had also been moderator of the student newspaper, The Villanovan, college chaplain and for many years, dorm counselor.

After having suffered several strokes, he returned to Saint Thomas of Villanova parish as an associate in 1977; and it was as a member of this community that he died.

Twice he was awarded the prestigious Freedoms Foundation Medal and was also the recipient of the Villanova Alumni medal. He served on the Crime Commission of the City of Philadelphia, on the Philadelphia World Affairs Council, on the Education Council of the Philadelphia Chamber of Commerce, on the Priests Senate of the Archdiocese of Philadelphia, and on the Board of Directors of the Urban League. He was also a member of such professional societies as Tau Beta Pi, Eta Kappa Nu, the Franklin Institute, the Academy of Natural Sciences, and the Philadelphia Professional Society.