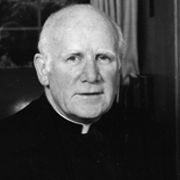 “President since 1975, Father Driscoll notified the board of trustees at its Dec. 8 meeting that he will be stepping down as the university’s chief administrative officer in August 1988.

Father Driscoll, 64, has served longer than any president in Villanova’s history.  He succeeded the Rev. Edward J. McCarthy, O.S.A., in July 1975.  At the time of his election, Father Driscoll was serving as vice president for Academic Affairs at Villanova.  He came here in 1965 from Merrimack College in New England, where he was religious superior of the Augustinian community and a member of that school’s board of trustees.

A 1948 graduate of Villanova, Father Driscoll earned both his master’s degree and his doctorate in philosophy from Catholic University.  He was ordained in 1951, and began a teaching career at Archbishop Carroll High School in Washington, D.C., shortly thereafter.

In 1956 he was transferred to Merrimack, where he served as a philosophy teacher and later as vice president and dean.  He remained there until his assignment to Villanova in the mid-1960s.  It was a time of national turmoil involving campus protests and students demanding a stronger voice in university governance.  As vice president, Father Driscoll played a major role in student-university relations that eventually brought about the university senate at Villanova.

He became the university’s 30th president in July 1975, beginning tenure of distinguished service.  In 1978 he was elected president of the Pennsylvania Association of Colleges and Universities and became a recognized educational leader in the state.

During the 12 years of his presidency, those qualities of leadership were reflected in the growth, advancement and reputation of the university.  The purchase of land extended the borders of campus.  New dormitories were constructed.  Both the Connelly Center and the Pavilion were completed, and numerous buildings were renovated.  A comprehensive internal evaluation nears completion.

To help offset the costs of expansion, Father Driscoll instituted the university’s first national fund-raising campaign.  The Covenant Campaign, in two phases, raised more than $34 million over a 10-year period.

But most important, Villanova has grown academically, from a good university to one that U.S. News and World Report called one of America’s best.  Under Father Driscoll’s direction, Villanova joined the academic elite.  Its student body is increasingly more select and geographically diverse and its academic curriculum more innovate and challenging.  Its faculty ranks among the best in the nation, providing a values-centered education that earned plaudits in a recent national poll of college presidents.

All of the objective indicators of institutional excellence have been met during Father Driscoll’s presidency, and as a result, Villanova’s course has never been brighter as it prepares for the future.”