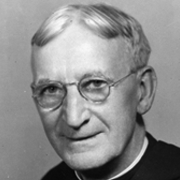 Father Joseph Hickey was born in Chicago, Illinois, in 1883. He went to Villanova, Pennsylvania, in 1898 as an Augustinian postulant and entered the novitiate in 1902. Two years later he was sent to the International College of Saint Monica in Rome, Italy, to continue his studies for the priesthood. He was ordained in Rome in 1906. After ordination, he remained in Rome to do graduate work in Canon Law, for which he was granted a doctorate in 1908.

Father Hickey then returned to the United States and was assigned to the newly established Saint Rita's High School in Chicago, Illinois. In 1910, he became Rector of Saint Rita's Hall, the Augustinian preparatory seminary at Villanova and, also, a professor at the College. He was appointed Province Regent of Studies in 1913, Definitor in 1914, and Provincial Socius and Secretary in 1918.

Father Hickey became the first Prior of Saint Mary's Hall at Villanova and held this post until he was appointed President of Villanova College in January 1925. At the General Chapter of September 1925, he was named Assistant General for the English-speaking provinces of the Augustinian Order. From that time until 1953, except for the war years, he lived in Rome, Italy.

At the General Chapter of 1947, Father Hickey was elected Prior-General of the Order of Saint Augustine. During his term of office, Saint Monica's in Rome was completely remodeled, and the new Curia building was erected. In 1953, after completing his term as Prior General, he retired to Saint Thomas of Villanova Monastery on the Villanova University campus. He was seventy-two years old when he died on 9 July 1955 in Bryn Mawr Hospital, Bryn Mawr, Pennsylvania. He is buried in the Augustinian Community Cemetery on the Villanova University campus.