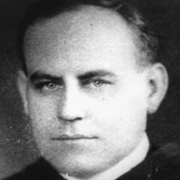 Father James Griffin was born 11 December 1891 in the Bronx, New York. He entered the Augustinian novitiate in 1909 and was professed a year later. In September 1912, after graduating from Villanova College, he was sent to Saint Monica's International College in Rome, to study theology. The onset of World War I called him home in 1915. He was ordained at Villanova.

From 1915 to 1926 Father Griffin served the parish of Our Mother of Consolation in Chestnut Hill, Philadelphia, Pennsylvania. In June 1926 he was appointed President of Villanova College.

It was during his presidency that Villanova, in 1928, suffered the first of two fires separated by only a few years.

In 1932 Father Griffin began a series of pastorates in New York State: at Waterford, Jamaica, Staten Island and Greenwich. He gained a widespread reputation throughout New York State as an organizer working with the Saint Vincent De Paul Society and as chaplain of Queens General Hospital, New York. He was also noted for his work with alcoholics and drug addicts.