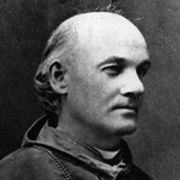 Bishop Thomas Galberry was born in County Kildare, Ireland, in 1833. He entered the Augustinian novitiate at Villanova, Pennsylvania. His ordination to the priesthood by Bishop John Neumann of Philadelphia took place in 1856.

The newly--ordained Father Galberry first served on the missions of Saint Denis' in Ardmore, Pennsylvania, and of Saint Augustine's in Lansingburg (Troy), New York. He later was Prior of Saint Thomas of Villanova Monastery and President of Villanova College from 1872 to 1876. During this time, the west wing of Alumni Hall was added to the original building.

Father Galberry's next assignment was as Commisssary-General of the Vice Province in America, and, when it became a Province; he was elected its first Provincial.

In 1876, he was consecrated the fourth Bishop of Hartford, Connecticut. Bishop

Galberry was on his way to Villanova College from Hartford when he died in New York City on 10 October 1878, at the age of 45. He was buried in the Cathedral at Hartford, Connecticut.

The building currently housing the Graphic Services Department on the Villanova University campus is named in his honor.