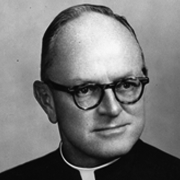 Father Joseph Anthony Flaherty was born on 13 June 1916 in Philadelphia, Pennsylvania, to James A. Flaherty and Mary A. Bradley. He was baptized in the Church of the Gesu, Philadelphia. He attended the Gesu Parochial School, Saint Joseph's Preparatory School, and in 1938 received an A.B. degree from Saint Joseph's College in Philadelphia. In the fall of 1938 he was accepted into the Augustinian novitiate in New Hamburg, New York, and professed simple vows on 31 October 1939. Three years later he made his solemn profession at Villanova College, Villanova, Pennsylvania, where he was taking courses in philosophy. In 1940 he began his theological studies at Augustinian College, Washington, D.C. During the summer months he took graduate courses at the nearby Catholic University of America. On 29 May 1943, he was ordained to the priesthood at Trinity College Chapel in Washington, D.C. In 1946 he was granted a Master's degree, and in 1949 a Ph.D., in English from Harvard University, Cambridge, Massachusetts.

In 1947 Father Flaherty was assigned to the newly opened Merrimack College in North Andover, Massachusetts, as a teacher of English. He at first resided at Saint Augustine's Rectory in Andover but on moving onto the campus in 1947 he became chairman of the English department; and from 1951 to 1964 he held the position of director of the Part-time Division of the College. In 1964 he was transferred to Villanova University and appointed Vice-President for Academic Affairs. In the following year, 1965, he became the twenty-seventh president of the University. During his tenure as president the entire curriculum of the university was made available to women students; the construction of the first residence hall for women was begun; and salaries for the faculty were raised. In 1967 Father Flaherty returned to Merrimack College as a professor of English because of failing health but continued to teach until he retired in the mid-1980s. Even after a major operation his condition continued to worsen, and in 1993 he was transferred from Our Mother of Good Counsel Monastery on the Merrimack College campus to Saint Thomas of Villanova Monastery on the Villanova University campus. It was here that he died peacefully on 8 August 1993 at the age of 77.

Father Joseph Flaherty's life as a religious priest was aptly described in a tribute given him as he finished his tenure as president of Villanova: "To generations of students, to his colleagues in higher education, and to his Augustinian brothers, Father Joseph Flaherty is a man of great wit, wisdom, and culture. Although an able administrator, he is above all a teacher, a communicator of literary treasurers, an inspiration to young and old alike."

A Mass of Christian Burial was celebrated at Saint Thomas of Villanova Church on the campus of Villanova University on 11 August 1993. Father George P. Lawless, O.S.A. delivered the homily. Interment was on the following day in the Augustinian plot of Calvary Cemetery, West Conshohocken, Pennsylvania. Some days later a memorial Mass was celebrated at the Collegiate Church of Christ the Teacher on the campus of Merrimack College in North Andover, Massachusetts.