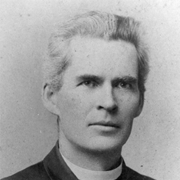 Father John Joseph Fedigan was born in Rathbran, Ireland on 27 April 1842. He studied at Saint Mary's College in Wilmington, Delaware, before entering the Augustinian novitiate at Ghent, Belgium. He was ordained to the priesthood on 24 October 1868 by Bishop Shanahan in the Philadelphia Cathedral.

During his forty years as a priest, Father Fedigan held many positions in the Province of Saint Thomas of Villanova. In addition, he made many contributions to the spread of the faith and to the growth of the Augustinian Province. In 1874, he was the first Augustinian to serve in Carthage, New York, and became the first Rector there. He was also elected Definitor for American Augustinians at several chapters.

Serving as Prior and Pastor at Saint Nicholas' in Atlantic City, New Jersey, for eighteen years, he established the first rectory and was the first resident Pastor. Through negotiations with Cardinal Gibbons and Archbishop Ireland, he also secured for the Augustinians a parish in Cuba.

In 1879 he opened the mission of Saint Monica at Reeseville (Berwyn), Pennsylvania, to which he sent Father William Jones, later Bishop of San Juan, Puerto Rico. Father Fedigan also negotiated with Archbishop Corrigan for the assignment of "Old Austin Place" on Staten Island, New York, (previously a Visitation Convent) to the Augustinians as a parish.

Father Fedgian served as President of Villanova College from 1878 to 1880, and at the Chapter of 1898, he was elected Provincial. In this position, he raised more than $275,000 to erect a new college building and Augustinian Monastery at Villanova. These buildings were completed in 1900 and 1901, respectively, and the new monastery was officially blessed by Father Fedigan on 29 June 1901. From 1902 to 1906, he served as Prior at Our Mother of Good Counsel, Bryn Mawr, Pennsylvania, after which he returned to the monastery at Villanova.

Father Fedigan died on 27 April 1908 at the age of 66. He is buried in the Augustinian Community Cemetery at Villanova. Fedigan Hall, a residence building at Villanova University, is named in his honor.