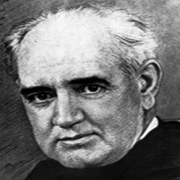 After ordination Father Driscoll was assigned to Villanova College as a professor of mathematics. In 1914 he was appointed Vice-President of the College and President from 1920 until 1924. In 1925 he founded Cascia Hall, a new Augustinian preparatory school in Tulsa, Oklahoma.

Father Driscoll was 56 when he died in Florida, on 6 February 1945, following an illness of three years. He was the first priest of the Province of Our Mother of Good Counsel (just previously established) to die. He is buried in the Augustinian Community Cemetery at Villanova.