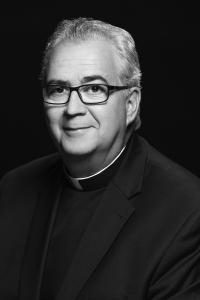 Villanova University’s thirty-second president, the Rev. Peter M. Donohue, O.S.A., Ph.D., has been an integral member of the Villanova community for nearly two decades. During this time, he has been immersed in all aspects of campus life.
Father Donohue is a tenured professor who from 1992 to 2006 served as chairperson of the Villanova Theatre Department. He is an award-winning director whose productions have received nearly thirty nominations for Barrymore Awards, which recognize excellence in Philadelphia-area theatre.

Father Donohue is a visible presence at Villanova and may be best known among students for his vibrant liturgies, his longtime role as chaplain of the University’s Naval ROTC program, and for regularly hosting groups for dinner at Burns Hall, one of the Augustinian friaries on campus. He has served on numerous committees at Villanova, including the Augustinian Institute Advisory Board and the NCAA Certification Self-Studies, and as a faculty representative on the Board of Trustees Academic Affairs Committee. Father Donohue also assists at St. Thomas of Villanova Parish on weekends and has officiated at numerous weddings of University alumni throughout the country.

Father Donohue was born in Bronx, New York in 1952, and raised in Royal Oak, Michigan. He received a Bachelor of Arts degree from Villanova in 1975 and was ordained a Roman Catholic priest in the Order of Saint Augustine in 1979. He received a Master of Arts in theatre from the Catholic University of America in 1983 and in 1985 received a Master of Divinity from the Washington Theological Union. In 1992, he received his doctorate in theatre history from the University of Illinois, where he also was recognized for outstanding teaching.