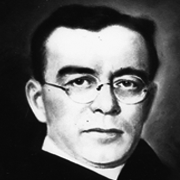 Father Edward George Dohan was born in Troy, New York, in 1870. He entered the Augustinian novitiate at Villanova, Pennsylvania, in 1895, and was ordained by Archbishop Patrick John Ryan in 1899.

He was stationed on Staten Island, New York, until 1906. Having from there, in 1905, established a mission in the Bronx, New York, he in the following year became pastor there of the newly established church of Saint Nicholas of Tolentine.

Father Dohan was appointed President of Villanova College in 1910 and held that position until 1917, after which he became Rector of Saint Joseph's in Greenwich, New York. From 1920 to 1926, he was in charge of Our Mother of Good Counsel parish, and of the Augustinian Academy, on Staten Island, New York. Father Dohan thus became the first Rector of the Academy, (school for Augustinian Postulants) when it was moved from Villanova to Staten Island. He also remained its the first Rector when it was moved from Austin Place to Grimes Hill on Staten Island. Later he served at Greenwich and Troy, New York.

Father Dohan died in Troy on 16 January 1936 at the age of 66. He is buried there in Saint Augustine's (Saint John's) Cemetery.