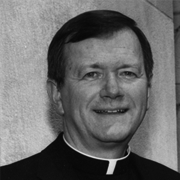 In his inaugural address on October 5, 1988, the Rev. Edmund J. Dobbin, O.S.A. likened an institution's identity to an individual person's identity; as something ultimately unique. Villanova University's identity is embodied in its charter and its mission statement, but it also includes a collective consciousness. "Our identity is who and what we are, have been and aspire to become," Father Dobbin said.

Serving as the 31st president of Villanova University, Father Dobbin has guided the Villanova community into the 21st century with an enhanced sense of identity and a reaffirmed commitment to the University's Catholic, Augustinian mission. Through a comprehensive strategic planning process and the careful management of endowment resources, Villanova has implemented innovative curricula, increased scholarship funding, expanded faculty endowments and improved its physical plant during Father Dobbin's tenure.

Villanova's record of achievement under the Dobbin presidency has had a wide-reaching impact. This year, for the 15th time, /U.S. News & World Report/ has recognized the University's commitment to teaching and learning in its selection of Villanova as the number one ranked regional institution in the North.

The hallmarks of an Augustinian education - the relentless pursuit of knowledge, the commitment to community, and the integration of mind, heart and spirit - shape the thoughts and values of every member of the Villanova community. These traditions, combined with a commitment to educational excellence, solidify the University's mission and provide guidance for a future of unprecedented achievement.

Over 10,000 students, including approximately 6,300 full-time undergraduates, from 49 states and more than 29 foreign countries, are pursuing their education at Villanova. Of those students accepted for enrollment each year, more than 120 qualify for the University's prestigious Honors Program and 49 percent of Villanova's incoming first-year students rank in the top 10 percentile of their high school class.

While Villanova students work hard and take advantage of the academic, professional and spiritual opportunities available to them, they also participate in more than 150 registered student organizations, compete on 11 men's and 13 women's sports teams at the NCAA Division I level, and volunteer for community service at a rate in excess of 75% of the student body.

Villanova's national and international reputation, as well as its students' academic experience, has been enhanced by distinguished faculty. The University's 515 faculty, 90 percent of whom hold the highest degree in their respective field, have steadily garnered national recognition, including Fulbright Fellowships, Guggenheim Fellowships, and a host of teaching awards.

A recognized scholar and administrator, Father Dobbin served as a member of the Villanova University Board of Trustees from 1979 to 1987. He was appointed associate vice president for Academic Affairs in 1987, a position he held until his inauguration as University president in 1988.