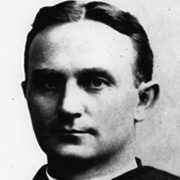 Father Laurence Delurey was born in Easton, New York, on 15 May 1864. He entered the Augustinian novitiate at Villanova, Pennsylvania, in 1885, and was ordained to the priesthood by Archbishop Patrick John Ryan of Philadelphia in 1890. He served for a short time at Saint Nicholas of Tolentine in New York City, in 1901 before being transferred to Saint Augustine's in Havana, Cuba. After becoming, first, Procurator and then Vice-President at Villanova College, he served as President there from 1895 to 1910. In 1905, during his presidency, the inauguration of the engineering school was announced.

Father Delurey died in the General Hospital in Troy, New York, on 21 December 1922 at the age of 58. He is buried in Saint Augustine's (Saint John's) Cemetery in Troy.

Delurey Hall, a residence hall on the Villanova University campus, is named in his honor.