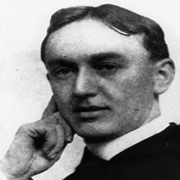 Reverend James Joseph Dean, O.S.A., was born in Lawrence, Massachusetts on 14 March 1879. After completing college studies at Villanova, he did graduate work at the University of Pennsylvania. He was ordained to the priesthood on 29 September 1901. For twenty-five years he was a member of the Villanova faculty, teaching mathematics.

During his brief time as president of Villanova, he, in 1918, underwent two serious operations and was thereafter in poor health. His successor in the presidency was Father Francis A. Driscoll, O.S.A., previously prefect-of--studies and vice-president.

Father Dean was an able orator. During World War I this talent of his was drawn upon for Liberty Loan drives and other patriotic celebrations.

In October 1919 Governor Spoul appointed Father Dean a member of the State College and University Council, which passed on charters of incorporation for educational institutions. Father Dean was the first Catholic college president ever appointed to this council. He died in April 1964.

The above account is based on an entry in the Evening Bulletin, June 1920 bearing the headings: The Rev. J. J. Dean Quits Villanova. Resigns as President Because of Illness. Succeeded by Rev. Francis A. Driscoll.