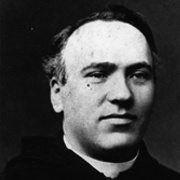 Rev. Joseph A. Coleman, O.S.A., was a native of Ireland. He did his early studies with the Augustinian Fathers in his native land, completing his education for the priesthood at Ghent, Belgium. Very Rev. John J. Fedigan, O.S.A., was his classmate. After his ordination he returned to Ireland and was for a time prior at St. Augustine's and St. John's churches, Dublin. In 1875 he came to America and was engaged in mission work for two years, and then returned to his native land. He came back to America and became affiliated with the American province. At St. Augustine's parish, Philadelphia, Pennsylvania, where he served for about three years, he reorganized the Sacred Heart Society, succeeding so well that its membership under his direction approached nearly one thousand.

From July, 1880, to July, 1886, he was president of Villanova College and prior of the monastery there. During this time the Church of St. Thomas of Villanova was erected. At the close of his term as president he went to Australia as a missionary and, while there, met with an accident, a fall from a horse, which left lasting damage and was eventually the cause of his death.

While in Philadelphia, Pennsylvania, on his way home to Ireland from Australia, he received instructions from the prior general of his order to remain there and engage in the collection of funds for the newly established Italian Church of Our Lady of Good Counsel. This involvement was successful in great measure because of his efforts. He died while there at Good Counsel and was buried in the priests vault at St. Augustine's. Archbishop Ryan of Philadelphia performed the final funeral rite preceding interment of the body.