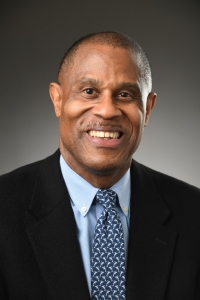 VILLANOVA, Pa.—As part of the celebration of Black Catholic History Month, Villanova University will welcome the Rev. Bryan Massingale, STD, one of the most distinguished voices in theological and social ethics, to deliver the 2022 Mother Mary Lange Lecture in Black Catholic Studies, at 7 p.m., Thursday, Nov. 3, in the John and Joan Mullen Center for the Performing Arts’ Topper Theatre. Following the lecture, University officials and the Dallas-based artist Vernon Adams will unveil the latter’s original 48 x 48 painting of St. Augustine as an African man. The portrait, titled An Unlikely Aquilegia: North African Saint of Hippo, was commissioned by the Office of the President.

Professor Massingale, the James and Nancy Buckman Chair in Applied Christian Ethics at Fordham University, is one of the most sought-after theologians, especially in the area of Black Catholics. His popular book Racial Justice and the Catholic Church (Orbis, 2010) won a first-place award from the Catholic Press Association. He has served as a consultant to the United States Catholic Conference of Bishops, the National Black Catholic Congress, Catholic Charities USA, the Catholic Health Association and Catholic Relief Services, among other organizations. He has received many accolades for his scholarship and activism, including the Pax Christi USA Teacher of Peace Award in 2021.

The unveiling of the portrait during this event is most appropriate, as Villanova’s heritage, mission and identity are rooted in one of the most prominent of the Church’s saints and thinkers: Augustine, who was born Nov. 13, 354, in what is present-day Algeria. His birth date, as well as other important dates related to Catholics of African descent, prompted the National Black Catholic Clergy Caucus of the United States in 1990 to establish November as Black Catholic History Month.

The lecture series, which was inaugurated in 2021, takes its name from the Servant of God Mother Mary Lange, who is one of six American Catholics of African descent on the road to canonization. She was the resilient and pioneering chief founder of the Oblate Sisters of Providence in Baltimore, the first permanent congregation for women of color, established in 1829. The order, in turn, founded St. Frances Academy, the oldest continuously operating school for Black Catholic children in the United States. Villanova was one of the first Catholic institutions of higher education to welcome Black women religious, most notably the Oblate Sisters of Providence, after World War I. The Lange Lecture exemplifies the University’s ongoing commitment to anti-racism, as well as to the contributions and achievements of Black Catholics.

The Lange Lecture is sponsored by the Office for Mission and Ministry, the Office of the Dean of the College of Liberal Arts and Sciences, and the Department of History. It is free and open to the public; however, tickets are required. Please RSVP at the Mother Mary Lange webpage. Those unable to attend are invited to watch it via live stream.