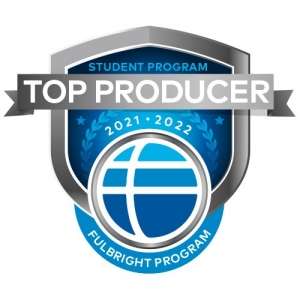 VILLANOVA, Pa.—Villanova University has been listed as a top producer of 2021-2022 Fulbright U.S. Students—as recently announced by the U.S. Department of State’s Bureau of Educational and Cultural Affairs (ECA). The Fulbright Program is the U.S. government’s flagship international educational exchange program. Top-producing U.S. colleges and universities are highlighted annually in The Chronicle of Higher Education. Villanova had 11 students and alumni win Fulbright awards for the 2021-2022 academic year. For the full list of Top Fulbright Producers, click here.

“Villanova has a wonderful history of success in the Fulbright competition, which is a direct result of the impressive accomplishments of so many Villanovans, as well as the support that exists at the University to prepare these recipients,” said the Rev. Peter M. Donohue, OSA, PhD, Villanova University President. “The impact that our Villanova Fulbright recipients have had in communities around the world is remarkable, and I look forward to seeing what the future holds for them.”

The Fulbright competition is administered at Villanova through the Center for Research and Fellowships (CRF). In the current Fulbright cycle, 49 of Villanova’s 73 applicants were named Semi-Finalists for the award and will be notified over the next three months if they are selected to go abroad during the 2022-2023 academic year.

The Fulbright Program was established over 75 years ago to increase mutual understanding between the people of the United States and the people of other countries. Fulbright is the world’s largest and most diverse international educational exchange program. The primary source of funding for the Fulbright Program is an annual appropriation made by the U.S. Congress to the U.S. Department of State’s Bureau of Educational and Cultural Affairs.

Since its inception in 1946, over 400,000 people from all backgrounds—recent university graduates, teachers, scientists and researchers, artists, and more—have participated in the Fulbright Program and returned to their home countries with an expanded worldview, a deep appreciation for their host country and its people, and a new network of colleagues and friends.

Fulbright is active in more than 160 countries worldwide and partners with participating governments, host institutions, corporations, and foundations in foreign countries and in the United States. Many of these organizations also provide direct and indirect support. ECA sponsors the Fulbright program, and several non-profit, cooperative partners implement and support the program on the Bureau’s behalf. For more information about the Fulbright Program, visit eca.state.gov/fulbright.