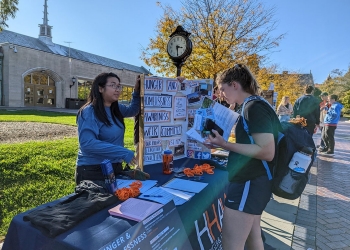 VILLANOVA, Pa. – Villanova University will celebrate its 48th annual Hunger & Homelessness Awareness Week (HHAW) from Sunday, November 13, through Saturday, November 19. HHAW originated at Villanova University in 1975 under the guidance of the late Father Ray Jackson, OSA, an Augustinian priest whose legacy also includes co-founding the University’s Center for Peace and Justice Education. In the years since, this week of coordinated activities and education has expanded beyond Villanova to more than 700 campuses and communities and, has become the most widely organized hunger and homelessness event of its type nationwide.

A full list of events can be found here.

About Hunger and Homelessness Awareness Week: HHAW began in 1975 when a group of Villanova students, recognizing the power education could play in the fight against homelessness, decided to coordinate a week of activities around the issues. National HHAW is now an annual event held the week before Thanksgiving – jointly sponsored by the National Student Campaign against Hunger and Homelessness (NSCHH) and the National Coalition for the Homeless (NCH). At Villanova, HHAW is co-sponsored by the Centers for Peace & Justice Education and Campus Ministry at Villanova University. Villanova also partners with numerous local and national organizations for the annual event, including Catholic Relief Services, The National Coalition for the Homeless, Project HOME, Back on My Feet, Catholic Network of Volunteer Service, etc.