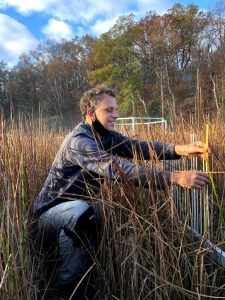 Rising sea levels are endangering the future of wetlands around the world. Scientists have long believed rising CO2 levels could stimulate extra plant growth at a rate that could outpace rising seas. A decades-long study published in ScienceAdvances May 18 by the Smithsonian Environmental Research Center (SERC) and Adam Langley, PhD, associate professor of Biology in Villanova University’s College of Liberal Arts and Sciences (CLAS), shows that this benefit is diminishing.

“The CO2 fertilization effect has always been one of the silver linings of climate change,” Langley said. “We thought, well, at least plants are going to grow more. But they didn’t. So, the silver lining just got a little cloudier.”

Langley joined the Smithsonian’s research on wetlands in 2005. These saturated lands are critical to fighting and adapting to climate change by soaking up and storing large amounts of carbon dioxide. The study took place at SERC’s Global Change Research Wetland, a research site on the western shore of Maryland. The study began in 1987 and is the world’s longest-running field experiment on how rising carbon dioxide levels impact plants.

“A long-term study like this is a gold mine because we started to learn a lot of things that you can’t otherwise,” Langley said. “We get to see how actual climate change occurring in the background is affecting our ecosystem over decades. You can’t do this over the cycle of a conventional three-year grant.”

The team studied experimental plots enclosed in chambers, boosted concentrations of CO2 in some and compared results to a control group with no added CO2 over three decades. For over half of the 33-year study, the team noted substantial growth; plants exposed to high CO2 on average grew 25 percent more than plants in untreated chambers, and root growth in high concentration groups grow roughly 35 percent. After 2005, positive impacts declined and then vanished.

“The CO2 effect exists potentially all the time but when the marshes are most stressed and really could use a boost, it vanishes,” he said.

More testing proved seal level rise was the dominant factor controlling plant growth. As waters rise, wetlands flood and plant roots suffocate. If roots don’t grow, the marsh can no longer grow upward. Langley and the team are looking at the possibility of wetlands migrating landward.

“These wetlands are going to need more help from us to survive sea level rise than we thought,” he said. “This natural mechanism that we were hoping would buoy them a little bit isn’t there. We need corridors that allow for that lateral transgression to occur.”

Creating corridors will require more space in surrounding communities. These accommodations are yet to be figured out, but the viability of wetlands and curtailing rising carbon dioxide levels depends on it.

“These coastal wetlands can be resilient where they’re allowed to be,” Langley said. “But some of these marshes are on life support and we have to do anything we can.”