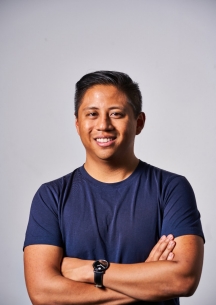 VILLANOVA, Pa.—The Villanova University Alumni Association (VUAA) has named alumnus Alessandro Roco ’09 COE as the recipient of its 2022 Young Alumni Medal. The award honors alumni who have made outstanding contributions professionally, academically and in service to the University.

“I can think of no better Villanovan to receive the Young Alumni Medal this year, given Sandro’s entrepreneurial spirit and commitment to bridging cultures,” said George Kolb, associate vice president for Alumni Relations. “He has built a truly multicultural business from the ground up, and still finds time to give back to his alma mater and make a difference in his local community. Sandro truly embodies the spirit of this award with all that he has accomplished in his short—and very impressive—career to date. I can’t wait to see all that Sandro continues to achieve and what the future holds for him.”

In 2019, Roco founded Sanzo, the first Asian-inspired sparkling water, whose mission is to bridge cultures by connecting people to authentic flavors. Sanzo celebrates high-quality Asian flavors using real fruit and no added sugars. Roco self-financed and launched Sanzo from his 500-square-foot studio apartment in New York City, and in less than three years has struck partnership deals with Marvel Studios for Shang-Chi and the Legend of the Ten Rings and Pixar Animation Studios for Turning Red.

Sanzo is now sold nationwide at Whole Foods Market, Target, Sprouts Farmers Markets, H-Mart and Panda Express. In February 2022, Sanzo completed a $10 million Series A fundraising led by top institutional and angel investors, including the venture arm of Pernod-Ricard, the second largest wine and spirits seller in the world.

“I’m honored and humbled to receive the Young Alumni Medal,” said Roco. “The core values of truth, unity and love instilled in me at Villanova have forever shaped my life and every interaction. I would like to dedicate this award to my parents, whose countless sacrifices afforded me the opportunity to be part of this special community. And I look forward to working with Villanova even more in the future to create opportunities for others to ignite change.”

Roco has worked in a variety of industries since graduating from Villanova in 2009 with a Bachelor of Science degree in Chemical Engineering and a minor in Business. He spent his first three years as a systems engineer at Exelon Corporation, before being hired as an analyst on the credit derivatives desk at J.P. Morgan.

In 2014, Roco became one of the first seven employees at Bombfell, a twice venture-backed personal styling company, where he was eventually promoted to head of growth and later to chief of staff and director of strategic initiatives. During his tenure, the company grew more than 1,900 percent over a three-year period and was named by Crain’s New York Business as one of the 50 fastest-growing companies in New York City.

Roco was active during his time on campus and has remained engaged with his alma mater post-graduation. As an undergraduate, Roco served as festival director for Special Olympics Fall Festival and co-editor-in-chief of The Villanovan, and he was a New Student Orientation counselor and member of the Blue Key Society and Sigma Chi Fraternity. Since graduating, Roco—who now resides in Brooklyn, N.Y.—has served as a co-chair for the Class of 2009 Five-Year Reunion and been a member of the VUAA’s Greater Philadelphia Chapter and Alumni Recruitment Network.