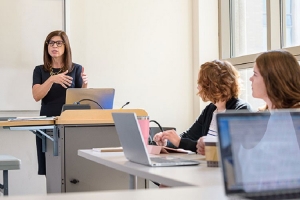 The Villanova University M. Louise Fitzpatrick College of Nursing (FCN) has, for the sixth consecutive time, earned the honor of Center of Excellence (COE) in Nursing Education, a designation from the National League for Nursing (NLN) that it has held continuously since being one of three inaugural NLN COE schools in 2004. FCN is a continuing designee in the category Creating Environments that Advance the Science of Nursing Education, and of the seven schools in the US to be so named, has held that distinction for the longest period of time, since 2010.

“FCN truly is the nexus of nursing education science, teaching, and leadership and we are proud to consistently carry this honor of NLN Center of Excellence in Nursing Education. Our redesignation is especially meaningful in 2022, the Year of the Nurse Educator,” says Donna S. Havens, PhD, RN, FAAN, Connelly Endowed Dean and Professor.

FCN faculty consistently design and develop pedagogical projects and programs of research to both advance the science of, and excellence in, nursing education. With innovative curriculum design and instructional strategies, there is an impactful experience for students to enhance their learning and create the next generation of nurses that are needed around the globe. While undertaking these efforts and disseminating their contributions to the wider profession, faculty are also mentoring students by engaging them in their work.

NLN President and CEO Beverly Malone, PhD, RN, FAAN, said in a July 14 release, “NLN Centers of Excellence help raise the bar for all nursing programs by role modeling visionary leadership and environments of inclusive excellence that nurture the next generation of a strong and diverse nursing workforce to advance the health of the nation and the global community.”

FCN will be formally recognized at the NLN's 2022 Education Summit in Las Vegas during the Honors Convocation on Friday, September 30.