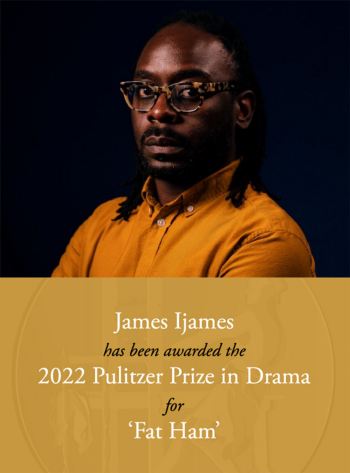 VILLANOVA, Pa. – James Ijames, associate professor of Theatre in Villanova University’s College of Liberal Arts and Sciences is the 2022 Pulitzer Prize Winner in Drama. The Pulitzer Prize for Drama is given to a distinguished play by an American author, preferably original in its source and dealing with American life. A playwright, educator, director and performer, Ijames was awarded the Pulitzer for his play Fat Ham, a “loose” according to the playwright—adaptation of Shakespeare’s Hamlet.

Ijames told the New York Times that he was always enthralled with Hamlet and—with Fat Ham—aspired to “bring it a little closer to my experience by putting it in the mouths of people that look like me and sound like me, that have my rhythms and eat the kind of food that I grew up eating.” Ijames encourages audiences who experience Fat Ham to “have a laugh” and learn “how people can become better versions of themselves.”

Pulitzer describes Fat Ham as “funny” and “poignant”—adjectives often used to describe Ijames’ work. The play “deftly transposes Hamlet to a family barbecue in the American South to grapple with questions of identity, kinship, responsibility, and honesty.” Unlike Shakespeare’s original work, the players in Fat Ham get a happy ending, as main character Juicy breaks free from his family’s cycles of trauma and violence. For more on Fat Ham, and to watch the trailer, visit the Pulitzer website.

Originally mounted in 2021 by The Wilma Theatre in Philadelphia where James is a Co-Artistic Director, Fat Ham was released as a video stream during the COVID-19 pandemic, which led to adaptations like soliloquies performed as direct address to the camera. The show will be performed live for the first time Off Broadway at The Public Theatre in New York City from May 12 - June 12, where Ijames has readapted the piece for the stage.

In reacting to the announcement of his receipt of the Pulitzer Prize in Drama, Ijames said, “I love that people who write for a living saw something that I wrote and they saw something of beauty in it. I love writers. I love poets. I love journalists. I love fiction writers. And so I am always really honored when I get to be in the company of people who are curious about ideas.”

James is the 2011 F. Otto Haas Award for an Emerging Artist recipient, and he has two Barrymore Awards for Outstanding Supporting Actor in a Play for "Superior Donuts" and "Angels in America" and two Barrymore Awards for Outstanding Direction of a Play for "The Brothers Size" with Simpatico Theatre Company and "Gem of the Ocean" with Arden Theatre. James is a 2015 Pew Fellow for Playwriting, the 2015 winner of the Terrance McNally New Play Award for "WHITE," the 2015 Kesselring Honorable Mention Prize winner for "....Miz Martha," a 2017 recipient of the Whiting Award, a 2019 Kesselring Prize for "Kill Move Paradise" and a 2020 Steinberg Prize.

James was a founding member of Orbiter 3, Philadelphia’s first playwright producing collective. He received a B.A. in drama from Morehouse College in Atlanta, GA and a M.F.A. in acting from Temple University in Philadelphia, PA. James an Associate Professor of Theatre at Villanova University and a co-artistic of the Wilma Theater. He resides in South Philadelphia.