Villanova Theatre Presents the 2021 Sue Winge Playwriting Award Winners: The Invisible Ones by Aly Gonzalez and Laundry by Megan Schumacher 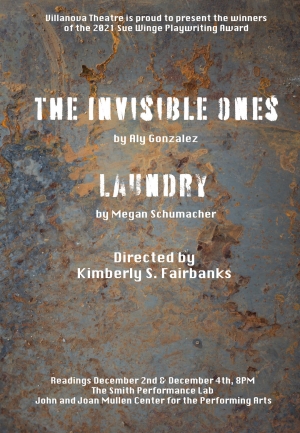 VILLANOVA, Pa.—Villanova Theatre is proud to announce the public reading of not one, but two, 2021 Sue Winge Award-winning plays: The Invisible Ones by Aly Gonzalez and Laundry by Megan Schumacher, directed by Kimberly S. Fairbanks on Thursday, December 2nd and Saturday, December 4th at 8PM in the Smith Performance Lab at the John and Joan Mullen Center for the Performing Arts. Schumacher (MA ’18) is a proud alum Villanova MA in Theatre, and Gonzalez is a current graduate student expecting her MA Fall ’21.

"We're really delighted to be able to confer this year's Award on two playwrights with very different, yet equally engaging, theatrical visions,” says Villanova Theatre Artistic Director Michael Hollinger. “Aly's The Invisible Ones is a beautiful snapshot of two unhoused teens living beneath an underpass, one of whom hopefully pursues a college education despite her strained circumstances.  Megan's powerful Laundry reveals another kind of ‘underworld,’ where five women, stripped of individual identity, labor under a dehumanizing system while struggling to retain their essential humanity.”

Production dramaturg Paul Goraczko remarked on the special qualities both plays have in common: “In Laundry and The Invisible Ones we have two utterly compelling pieces of theatre about people who are marginalized, forgotten, and yearning to be seen. Seeing these plays back-to-back will surely be a thought-provoking experience that audiences won't want to miss.”

Aly Gonzalez (Playwright, The Invisible Ones) is a second-year MA in Theatre student currently finishing her final semester, and who recently designed costumes for WHITE in fulfillment of her graduate thesis. Aly’s scholarships include the Joseph C. Franzetti, Jr. ’78 and Patricia M. Franzetti ’78 (2021-2022) and Susan Trimble Schaeffer (2020-2021). Aly’s adaptation of an epic poem, Descent, appeared as a staged reading during the 2021 Student Studio Show. As a performer, Aly has appeared at Villanova in Last Seen: Voices from Slavery’s Lost Families; a staged reading of scenes from The White Card (Charlotte); An Impossible Animal (Young Berkie) by Ian Notte; and Corpus (Stage Directions) by Effie Kammer.

Megan Schumacher (Playwright, Laundry) is a Philadelphia-based playwright, director, and dramaturg. She is a member of The Foundry at PlayPenn and Simpatico Theatre’s Jouska PlayWorks. Past works for Villanova Theatre include her play Dionté and Khai Do Dinner, an adaptation of Euripides’ The Bakkhai, which premiered virtually as part of Villanova Theatre’s Bakkhai Variations during the 2020-21 season. Her work in and around Philadelphia includes Lowndes, which debuted at the Philadelphia Women’s Theatre Festival in the fall of 2020, and her play Superlosers, which was produced for the 2018 Philadelphia Fringe Festival.

Director Kimberly S. Fairbanks (‘11) is a distinguished Villanova MA in Theatre alumnus, a professional actor, proud member of SAG/AFTRA and AEA, and a dedicated advocate of new plays. Kimberly’s work can be seen and heard regionally, nationally, and internationally across the performance mediums of television, film, theatre, and voice over. She is the recipient of The National Partners of the American Theatre Classical Acting Award, the Dell'Arte International School of Physical Theatre Mad River Festival Scholarship, and the Shaw Festival Scholarship. Fairbanks will direct a stellar cast comprised of a combination of six graduate and undergraduate students, in combination with three alumni actors.

The Sue Winge Playwriting Award was established in memory of beloved Villanova University employee Sue Winge, who served the University for many years in the Theatre Department and the President’s Office. The award annually supports the creation and development of new plays at Villanova University, including the recent Bakkhai Variations commissions and workshop of Julia Izumi’s Sometimes the Rain, Sometimes the Sea. Previous winners of the Competition include m4m by Mark Costello (MA ‘10), Reveille by Jessica Bedford (MA‘10), Pancake Queen by Brie Knight (MA‘14), Fluttering Pulses by Patrick Walsh (BA ‘16) and Fondest Wish by Kevin Esmond (MA ‘17).

The Invisible Ones and Laundry will have readings on Thursday December 2nd and Saturday December 4th, 2021 at 8PM in the Smith Performance Lab. A post-reading wine and cheese reception will follow the Thursday December 2nd performance. Performances are free and open to the public, though advance registration is encouraged and masks are required. Tickets may be purchased online at www.villanovatheatre.org or by calling the box office at 610.519.7474. Villanova Theatre is located on the Villanova University campus in the John and Joan Mullen Center for the Performing Arts (at Lancaster & Ithan Aves.).

Kimberly S. Fairbanks is a professional actor, proud member of SAG/AFTRA and AEA, and a dedicated advocate of new plays. Kimberly’s work can be seen and heard regionally, nationally, and internationally across the performance mediums of television, film, theatre, and voice over. Kimberly holds a Master’s Degree in Theatre from Villanova University and is the recipient of The National Partners of the American Theatre Classical Acting Award, the Dell'Arte International School of Physical Theatre Mad River Festival Scholarship, and the Shaw Festival Scholarship.

Villanova Theatre is a community of artist-scholars committed to transforming hearts and minds through the visionary production of classical, modern, and contemporary dramatic literature. Our work is fueled by the imaginative striving common to Villanova’s accomplished faculty, versatile staff, and energetic graduate students. Together, we are devoted to creating a vibrant theatre enriched by and overflowing with the ideas explored in our classrooms. In all of our endeavors, we aim to share the dynamic experience of collaborative learning with our audiences in order to engage the intellect and stir the soul.  As a facet of Villanova University, Villanova Theatre serves the campus community as well as thousands of theatre-goers from the Main Line and the Greater Philadelphia area.