Award is NCA’s highest accolade, honoring a lifetime of scholarly achievement in the study of human communication. 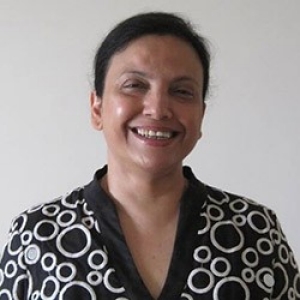 VILLANOVA, Pa.—Villanova University professor Raka Shome, PhD, professor and Harron Family Endowed Chair in the Department of Communication, has been selected as the recipient of the 2021 Distinguished Scholar Award from the National Communication Association (NCA). Given annually, the NCA Distinguished Scholar Award is the association’s highest accolade. It honors a lifetime of scholarly achievement in the study of human communication. Recipients are selected by their peers to showcase the best of the communication discipline.

Shome’s work focuses on postcolonial cultures, transnational feminism and media/communication cultures, with specific research interests in contemporary Hindu nationalism, Asian modernities and transnational media cultures. Her scholarship has offered critical and political perspectives with which to engage neocolonialism and racism in both the U.S. and abroad. She has modeled an innovative attention to reading coloniality not only for its oppressive capacity, but also the often-overlooked opportunities created by marginalized communities to claim space and voice.

“Receiving this recognition from the National Communication Association means a lot to me,” said Shome. “My research that has consistently challenged western imperial and racial politics of knowledge production in the academy and the larger culture is now being honored by our discipline. With this award, I am humbled to join others who constitute this small group of Distinguished Scholars.”

In 2021, Shome was elected as a fellow to the International Communication Association (ICA). Fellow status at Fellow status in the ICA is a recognition of distinguished scholarly contributions to the broad field of communication. Shome was the 2020 recipient of the Douglas W. Ehninger Distinguished Rhetorical Scholar Award from NCA, annually honoring scholars who have executed research programs in rhetorical theory, rhetorical criticism and/or public address studies. As one of the first decolonial scholars in the discipline, Shome has produced an important body of work that untangles colonial rhetorical and media practices.

“Dr. Shome is a leading scholar in communication studies whose work has introduced and advanced postcolonial frames in the discipline,” said Adele Lindenmeyr, PhD, Dean of the  College of Liberal Arts and Sciences. “We are delighted to see her work continue to be recognized, especially with such a significant accolade.”

Prior to arriving at Villanova, Shome was a faculty member at the London School of Economics, the University of Washington, Arizona State University and served as Senior Fellow at National University Singapore. She was also an invited scholar at the Advanced Institute of Cultural Studies in Sweden. She received her doctorate from the University of Georgia.

Shome and other 2021 NCA award recipients will be honored during the NCA 107th Annual Convention on Saturday, November 20.

NCA is the largest communication association in the United States. NCA serves the scholars, teachers and practitioners who are our members by enabling and supporting their professional interests in research and teaching. For more information, visit natcom.org.