The award is given for outstanding accomplishments in advancing the fields of radar technologies and their applications. 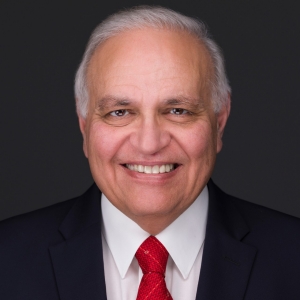 VILLANOVA, Pa.—Moeness Amin, PhD, professor and director of the Center for Advanced Communications (CAC) at Villanova University’s College of Engineering, has been named the recipient of the 2022 Dennis Picard Medal in Radar Technologies and Applications, among the highest honors  awarded by the Institute of Electrical and Electronics Engineers (IEEE). Dr. Amin was recognized for his contributions to radar signal processing across a wide range of applications including through-the-wall imaging and health monitoring. He will formally receive the award at a ceremony in 2022.

The IEEE Dennis J. Picard Medal for Radar Technologies and Applications was established in 1999, in honor of Dennis J. Picard, whose lifetime of work at Raytheon Company helped make them a leader in tactical missile systems. The honor is awarded based upon a number of criteria, including field leadership, contribution, originality, breadth, inventive value, publications, other achievements, society activities, honors, duration and overall strength of the nomination.  Of the 22 recipients of the Dennis Picard Medal, few have been from academic institutions.

Each year the IEEE Awards Board recommends a select group of recipients to receive IEEE’s most prestigious honors. These are the men and women whose exceptional achievements and outstanding contributions have made a lasting impact on technology, society, and the engineering profession.

“I am humbled to receive this prestigious award from IEEE and this Gold Medal is the crowning achievement in my career,” said Amin. “This recognition further establishes a legacy at Villanova for excellence in radar engineering. I am fortunate to have worked with so many talented students, postdoctoral fellows, research professors and faculty over the years on advancing radar systems.”

Amin’s signature contributions to radar span 30 years, during which time he established a truly unique and exceptional scholarly record in both depth and breadth. He is a leader in through-the-wall radar imaging and has been the main force behind the development of this area worldwide. Amin’s contributions to radar cover the areas of urban sensing, sparse arrays, radio frequency coexistence and convergence, cognitive radar, over-the-horizon radar, passive radar, synthetic aperture radar, automotive radar, ground penetrating radar and radar for healthcare.

“Moeness is a true pioneer in the field of radar, balancing fundamental discovery with innovative applications, from through wall imaging to health care,” said Michele Marcolongo, PhD, the Drosdick Endowed Dean of the College of Engineering. “He has not only distinguished himself as an international scholar, but as a research leader, mentor and colleague, serving as Director of Villanova’s Center for Advanced Communications. We are extremely proud that IEEE has recognized his remarkable accomplishments with the 2022 Picard Medal.”

Amin earned his PhD in Electrical Engineering from University of Colorado, Boulder in 1984. He has been on the faculty of the Department of Electrical and Computer Engineering at Villanova since 1985, becoming the director of CAC at the College of Engineering in 2002. During his illustrious career, Amin has published more than 800 journal and conference papers and has received countless awards and distinctions for his research. Amin’s groundbreaking work in the field has earned him four Fellow grades, four Technical Achievement awards, the Humboldt Prize and the Fulbright Distinguished Chair in Advanced Science and Technology. He is also the recipient of the IEEE Aerospace and Electronic Systems Society Warren D. White Award for Excellence in Radar Engineering, the 2010 Chief of Naval Research Challenge Award and the IEEE Third Millennium Medal.  Additionally, Amin has received 16 paper awards and is the editor of three books on radar.