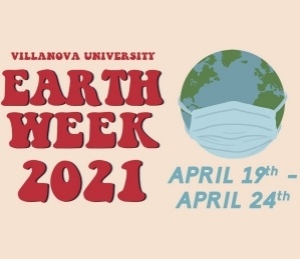 For a full listing of the 2021 Earth Week events, visit the University’s Sustainability website.

This year’s keynote address, "Christians, Climate, and our Culture in the US" will be delivered virtually by climate scientist Katharine Hayhoe, PhD, on Thursday, April 22 at 5:30pm. Dr. Hayhoe will address how climate change has triggered intense engagement and reactions from politicians, scholars, organizations and even churches—leading to a misconception that Christianity and science cannot co-exist. She is the Chief Scientist for The Nature Conservancy and the Chair of Public Policy and Public Law in the Department of Political Science at Texas Tech University. Dr. Hayhoe is also a principal investigator for the Department of Interior’s South-Central Climate Adaptation Science Center and the National Science Foundation’s Global Infrastructure Climate Network. Hayhoe’s research focuses on establishing a scientific basis for assessing the regional to local-scale impacts of climate change on human systems and the natural environment.

Other Earth Week highlights include a virtual talk on Monday, April 19 entitled “Climate (De)Regulation in the Courts” from Villanova University's Charles Widger School of Law professor Todd Aagaard, JD on the state of regulating climate change pollutants in the United States, and Open Mic Night for Justice on Saturday, April 24. The Open Mic for Justice is a space for a wide range of performances, including music, song, dramatic readings, comedy, sketches and skits, dance that gives voice to visions, hopes, and dreams for a world transformed. The event will also include a fundraiser and raffles to benefit the Public Interest Law Center of Philadelphia.

In addition, the University has eight LEED certified buildings on campus and has committed to LEED certification for all new construction and major renovation projects. In April 2014, Father Donohue signed the St. Francis Pledge, committing the University to “protect God's Creation and advocate on behalf of people in poverty who face the hardest impacts of global climate change.”

Villanova continues to be recognized as one of the nation’s greenest colleges, having received national recognition for its commitment to sustainability by a number of organizations including the Association for the Advancement of Sustainability in Higher Education (AASHE). Villanova recycles and composts up to 48% percent (22% of consumer waste) of its waste. The University has installed over 80 hydration stations on campus to make it more convenient to fill up reusable water bottles. In 2016, Villanova received a Tree Campus USA® recognition from the Arbor Day Foundation for its commitment to promote healthy trees and engaging students and staff in the spirit of conservation. By utilizing the Augustinian values of Unitas, Veritas, and Caritas, Villanova’s approach to sustainability exemplifies an emphasis on social justice and community service. The University continues to incorporate its commitment to the environment into its community service initiatives.