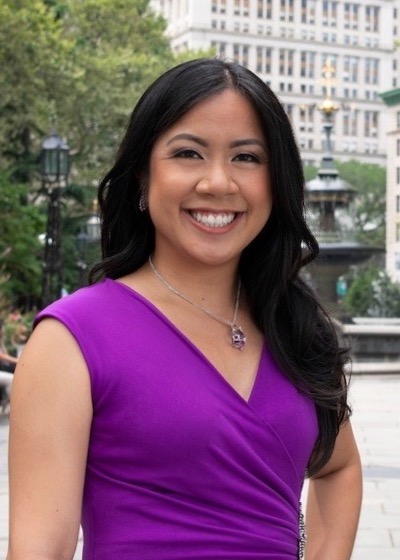 VILLANOVA, Pa. –  The Villanova University Alumni Association (VUAA) has named alumna Katarina Mayers ’11 College of Liberal Arts and Sciences (CLAS), as the recipient of its 2021 Young Alumni Medal. The award honors alumni who have made outstanding contributions to one or more areas of society, including professional, academic and service to the University.

“Katarina’s unwavering commitment to Villanova and the many leadership roles she has held—both when she was a student and now as an alumna—reflect why she is so deserving of this award,” said George Kolb, Associate Vice President for Alumni Relations. “Her dedication to public service that took her from Villanova to Chile, the White House and the NYC Mayor’s Office, is a testament to her tireless efforts to advocate for others while continuing to serve her alma mater.”

Mayers’ experiences have taken her across the country and around the world. After graduating Cum Laude from Villanova in 2011 with a Bachelor of Arts degree in Communication and minors in Gender and Women’s Studies, Spanish, and Theatre, she completed a year of service in Chile as a Rotary Foundation Ambassadorial Scholar, earning an academic certificate in Contemporary Latin America. After returning to the U.S., Mayers was selected as a Media Affairs/Hispanic Media Intern at The White House. From there, she was hired by the U.S. Department of Commerce as a Press Assistant and later as a Senior Press Coordinator. In 2015, Mayers was promoted to Deputy Press Secretary, where she served as spokesperson for a federal agency of 40,000 employees worldwide, working to spur good-paying jobs, empower entrepreneurs to innovate and grow, and help American workers and businesses compete in the global economy.

Mayers would go on to earn her master’s degree in Public Administration from Columbia University and represent her cohort from 68 countries as elected student body president, after which she was named Press Secretary and Director of Digital Media for the New York City Mayor’s Office of Media and Entertainment. In 2019, she became the first employee of NYC Census 2020 and served as Chief of Staff, growing the government initiative to boost New York City’s Census self-response rate and reach over 8 million residents. She recently moved home to the Los Angeles area, where she is transitioning to a career focused on high social impact.

During her time at Villanova, Mayers was actively involved across campus including as a member of Blue Key Society—for which she served on the executive board and chair of Candidates’ Day. Additionally, she performed in student musical theatre (VSMT), led the all-female a cappella group, “Nothing But Treble” as musical director, and emceed basketball and football games. Throughout her career, one thing that has not changed is her passion for and involvement with her alma mater. Mayers has worked with University Admissions as an alumni interviewer and is actively engaged with Villanova’s Public Policy Society and the Villanova Communication Alumni Network, serving as a mentor for students and recent graduates.

“I brought my ‘service above self’ approach when I came to Villanova, and I’m grateful that my alma mater nurtured and strengthened my passion for serving others,” Mayers says. “Villanova will forever be my second home, and I am always looking to bring our Villanova spirit and special sense of community wherever I go. I am truly humbled by this award and would like to thank my parents who instilled in me the importance of giving back. I look forward to working with Villanova as we strive to ignite change and inspire others to create a better world for everyone.”

Mayers has garnered numerous honors and awards including the Villanova CLAS Dean's Award Medallion, and the Ethos Award—presented by the Villanova Communication Honors Society, Lambda Pi Eta, to a Villanova alum who demonstrates character and excellence in the field of communication. Additionally, she received the Congressional Gold Award for Youth, the Campbell Award from the School of International and Public Affairs at Columbia University, and the Harvey Picker Prize for Public Service.